The incident occurred on Jan 4, while the rider was making a delivery and the entire altercation was captured in a 16 minute long video clip 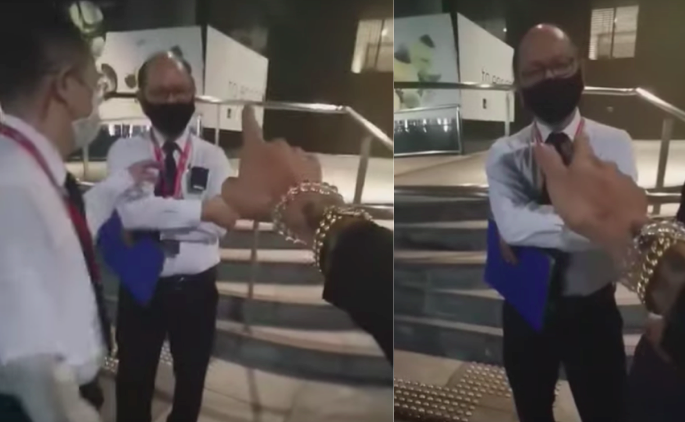 A food delivery rider shouted for more than 12 minutes at two security guards stationed at Marina One Show Gallery.

The rider filmed the entire incident, and uploaded it onto social media, along with his customer’s name and address.

The 16-minute-long clip was uploaded onto the Facebook page ‘SG Road Vigilante’. The incident supposedly happened on Monday (Jan 4), while the rider was making a delivery.

At one point, the rider asserted that he was not blocking the entrance to the building or to the drop-off point and told the security guards: “Double yellow line is LTA’s road. Inside is your private property”.

The rider continued: “I not blocking the entrance. Eh the entrance is here, so big. How many metres, go and count. A bus can come in. You don’t come and b***s*** with me, ok?”

At two points in the video, cars could be seen pulling up at the drop-off point from the road.

When one of the security guards told the rider that parking on the yellow line is wrong, the rider responded saying: “You ask me park outside what? Parking outside there is grace period from LTA 10 minutes ok?”

“This is the thing you say wrong. You don’t understand LTA law”, he added.

The entire exchange continued, with the rider speaking in both dialect and English to the security guards who remained calm throughout.

Towards the end of the video, the rider was heard asking one of the security guards: “What education you study? Answer me. What?”.

When the security guard responded “Diploma”, the rider replied: “Your diploma never study at all. Frankly speaking”.

The clip ended with the two security guards walking away from the scene. /TISGFollow us on Social Media