First ostrich, then horse, now pig – animals take over the roads in Malaysia 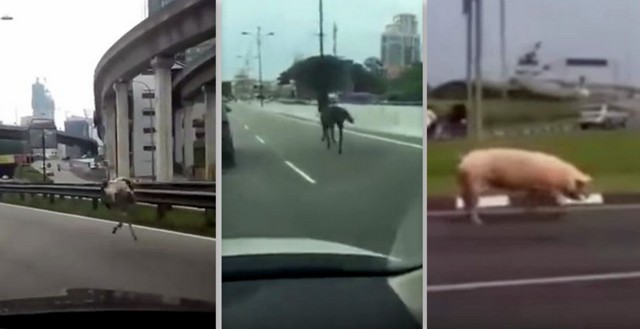 First it was an ostrich which was seen running in the midst of slow traffic in Kuala Lumpur. Then, it was a horse running down the highhway in Khota Bahru, Kelantan. And now, it is a pig trying to cross the road in Kuching, Sarawak. It seems sightings of animals on Malaysian roads are becoming quite normal these days.
On June 16, Facebook by user Jeff Sandhu posted the video of the ostrich running on the road towards the direction of the city centre in Kuala Lumpur.
[fvplayer src=”http://youtube.com/watch?v=bMjhnDZEhWE”]
Then, on June 18 Facebook user Adli Alimin posted two short videos on his page which showed a horse galloping down the highway. A man Wan Hanig has since claimed ownership of the horse.
[fvplayer src=”http://youtube.com/watch?v=IT0Kd0ncYQ4″]
Then yesterday, Youtuber Samuel Dark claimed that a pig was found crossing the road in Kuching Sarawak.
[fvplayer src=”http://youtube.com/watch?v=u3zSflnn4O8″]