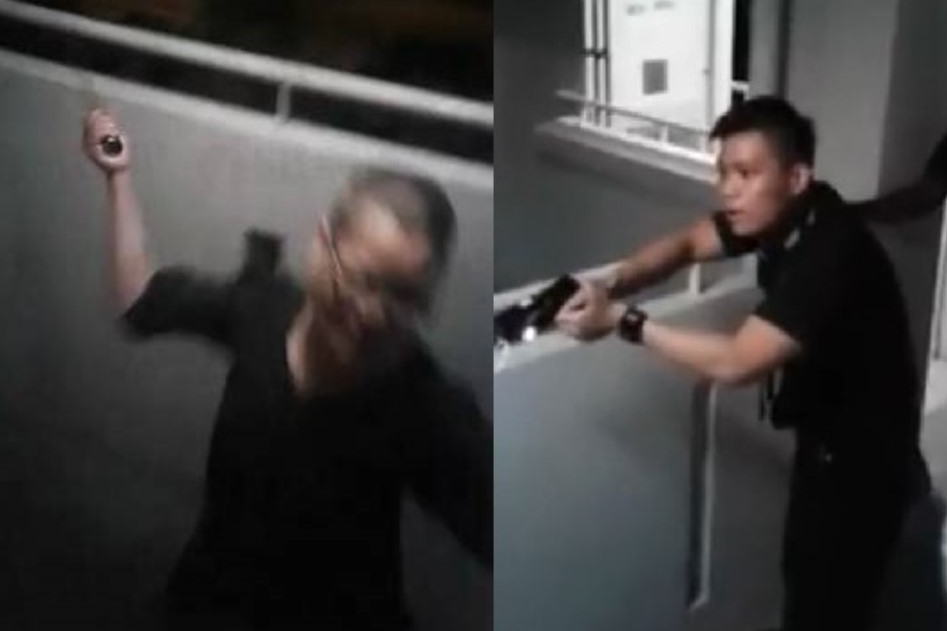 A video of a tense standoff between the police and an auntie has been going viral on social media. The video, shot by a neighbour, shows the senior citizen wielding a chopper and swinging at the neighbour’s door while the police shout at her to stand down.

At one point, the person shooting the video appears to stumble back when the auntie flings the chopper in their direction. One police officer proffers a shield towards the auntie while another policeman aims a taser at her and proceeds to taser her.

Even after dropping down after being tasered, the strong woman immediately gets up and remains defiant. She is forced to kneel and comply while the police officer holding the taser shouts throughout the video clip, asking the auntie to calm down, the woman screams, “No! No way!”:

Posted by All Singapore Stuff on Wednesday, 26 December 2018

The police has since revealed that the woman is a 61-year-old who was upset with the noise levels coming from her neighbour’s flat at Block 157 Serangoon North in the early hours of Christmas Day (Dec 25).

The neighbour called the police who saw the woman hitting the gate and windows of the neighbour’s unit with a chopper when they arrived at the scene. Sharing that the woman refused to stand down despite being instructed to drop the weapon several time, the police spokesman said:

“A police officer eventually deployed one cycle of taser on the woman as she continued to act violently and refused to cooperate, endangering her personal safety and that of others.

“The chopper dropped from the woman’s hand as she fell to the ground after she was tasered. However, she was able to stand up immediately and continued to resist arrest.

“Given that the woman was no longer armed and due to her age, the officers did not administer a second cycle of the taser on her or arrest her forcibly but advised her to cooperate with the police.”

The woman eventually complied and was arrested for criminal intimidation. The spokesman said that the woman “was then conveyed to Sengkang General Hospital where the doctor assessed that she did not sustain any injury. She was released on police bail on the same day.”Follow us on Social Media