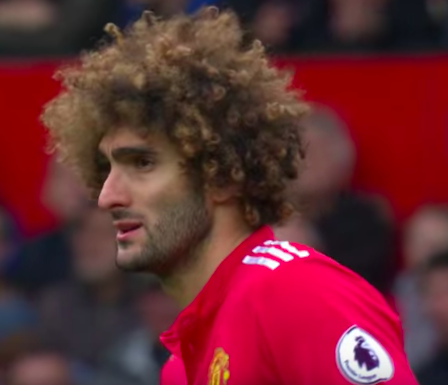 The 32-year-old Belgian international midfielder, who recently returned to his CSL team Shandong Luneng, wrote on Twitter: “Thanks to the fans, medical staff and the club for their care and attention.

“I will follow the treatment and hope to return to the game as soon as possible. Please everyone stay safe,” he added, posting a picture of himself smiling and giving a thumbs-up.

Shandong Luneng said Fellaini had a normal temperature and was feeling fine, but “is under observation and having treatment at a designated medical facility”.

“The club will do its best… to help in the treatment and recovery of the player.”

Former Real Madrid president Lorenzo Sanz, who was hospitalised with the coronavirus, died on Saturday at the age of 76.

But Fellaini is the first confirmed case in the CSL, dealing a blow to the league’s hopes of starting the season as early as next month.

The campaign was supposed to begin last month but has been indefinitely postponed by the outbreak.

Chinese officials, concerned about a second wave of virus infections from abroad, will be taking a close look at Fellaini’s recent travel history to see who he had contact with.

Having flown from Singapore to Shanghai, he reportedly took a high-speed train from there early on Friday to Jinan, the city home to Shandong Luneng.

He was taken by car to a quarantine area and tested for the virus on Saturday, Chinese media said.

Wu, who plays for Spanish strugglers Espanyol, is in self-isolation at home in Barcelona and has only mild symptoms.

The coronavirus emerged in the central Chinese city of Wuhan in December and has since spread across the world and become a pandemic, killing nearly 13,000 people and infecting more than 300,000.