Former presidential candidate Tan Kin Lian has been at the receiving end of certain double-meaning remarks on social media, after he revealed his plans to consume the Tongkat Ali he bought overseas.

Tongkat Ali (or Malaysian ginseng as it is more commonly known in other parts of the world) is generally known as an aphrodisiac. The root is boiled in water, and the water is consumed as a health tonic for post-partum recovery, as an aphrodisiac, as well as the relief of fever, intestinal worms, dysentery, diarrhoea, indigestion, and jaundice.

Yesterday (10 Dec), Mr Tan wrote that he bought a bottle of Tongkat Ali from Batam recently and described what good value his purchase was. Sharing a photo of the Tongkat Ali bottle, he wrote:

Netizens responding to his post teased him with tongue-in-cheek comments alluding to the root’s function as an aphrodisiac: 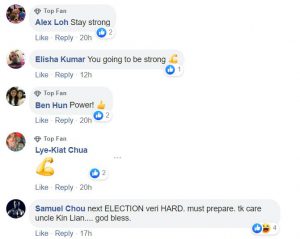 This is not the first time the ex-NTUC Income CEO has professed his love for Tongkat Ali. Last year, he shared a photo of a packet of Tongkat Ali and said that he bought the aphrodisiac for RM340 in Malaysia.

Describing how to make Tongkat Ali tea, Mr Tan added that it is rumoured that the Malaysian Prime Minister, Dr Mahathir Mohamad, takes the herbal aphrodisiac as well: “I bought tongkat ali. Take 4 slices. Make several rounds of tea until the flavor is gone. Can drink a few rounds daily. Rumour Dr M takes it. RM 340.”

Tongkat Ali is banned from being exported from Malaysia. The Malaysian government has listed as one of the priority medicinal species for conservation, and the harvesting of wild trees is restricted according to Act 686 on International Trade in Endangered Species.

When a Facebook user cautioned him that it may be illegal to bring the herbal root into Singapore, Mr Tan replied: “If customs say cannot, some fb fan must have tipped them off.”

Another Facebook user who responded to Mr Tan’s post tagged Singapore’s Immigration and Checkpoints Authority in Mr Tan’s post. Mr Tan subsequently posted that he was busted at the Changi Airport by a customs officer who wanted to know if he was carrying any Tongkat Ali through the Singapore checkpoint. He added that a “traitor tipped him off”.

Changi airport customs officer – are you Mr Tan?Any tongkat ali to declare?A traitor tipped him off!

He later told The Independent that he was joking that customs officers asked him if he has Tongkat Ali to declare.

I bought this bottle of Tongkat Ali slices from Batam for $10. I use 6 slices to boil 3 cups of tea. I am able to boil the same slices 7 times. The $10 can last a long time.