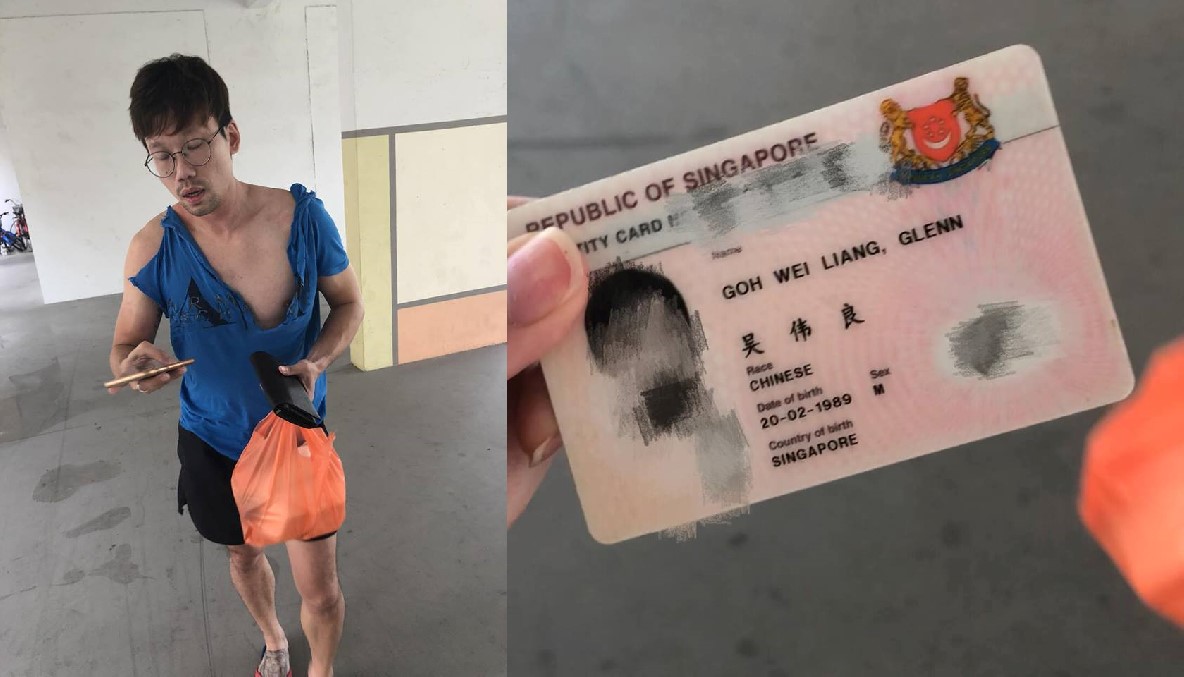 Ex-Navy operations officer Glenn Goh Wei Liang appears to have returned to taking upskirt videos of local women, even after serving an 18-week term in jail.

Goh was sentenced to jail last year, on 20 Nov, after he was convicted in court on ten counts of insulting the modesty of several women. Investigators found that Goh had upskirt footage of about 50 victims going back till 2015.

The serial pervert was only 28 when he started his spree and continued to target women in public places. The court heard that Goh would sidle up to his unsuspecting victims in public places and start recording once he placed his smartphone near their thighs. Goh would then use the footage he had collected to satisfy his sexual urges.

Goh was finally brought to justice when a man caught him in the act, trying to take an upskirt shot of the man’s girlfriend. Noticing that Goh was “half-standing near the victim, with his right hand holding the phone under her skirt,” the victim’s boyfriend confronted Goh – who denied committing any offense – and detained him until the authorities arrived.

Last year, Goh pleaded guilty to all charges and his attorney cited “situational stress” as the cause of his client’s perverse behaviour. Goh subsequently served 18 weeks in jail.

The ex-Navy personnel is back in the news after he targeted a new victim not long after he was released from jail. The victim, a young woman, took to Facebook to share her encounter with a man who allegedly took an upskirt video of her – only to find that the man she encountered has already been jailed for outraging the modesty of several others.

According to the distressed girl’s Facebook post, she had been on the way home after her first day at her new internship yesterday when she heard a plastic bag rustle and felt someone’s breath on her neck. The girl quickly turned and saw a man pulling a phone back from under her skirt.

The woman confronted the culprit and chased him but the man allegedly managed to delete the footage in the ensuing scuffle, in which he also injured the girl’s wrist. In a video the girl shared, the man can be seen with his shirt tattered in the fight, denying any wrongdoing as the girl confronts him:

The girl demanded to take a photo of the man’s IC and shared a photo of his identity card online. The girl’s friends subsequently pointed out that the man shares the same name and a striking resemblance to the ex-Navy officer.

Edit: hi… i received so many messages from both females and males and i really wish to express my thanks for the…

“Edit: hi… i received so many messages from both females and males and i really wish to express my thanks for the effort & time u took to message me, to encourage me & to tell me about ur own experience. however, I’m in a really down mood.. I’m worried about the fact he knows the area I live (I have to walk past there Everyday) and other issues pertaining to the matter. I’m sorry if I didn’t reply because I really don’t feel like talking much. Thank you guys.

After much consideration, and despite the fact that i have concerns for my safety, i have decided to tell my story today to the public. Most importantly, i hope that my experience shared is not futile…women should always take a stand for themselves.
I was wearing a Long sleeve shirt and almost a knee length skirt, yet this incident could happen. if i as an adult was so scared, I cannot imagine teenagers or secondary school girls in the same position. Dont be scared and keep quiet about it…

1. I was walking home, it was in the afternoon. I was reading something and not really paying attention to my surroundings, i did hear a plastic bag sound behind me and subconsciously realised that there was someone behind me, but i didn’t realise how close this person was until i felt something touch my right inner thigh..

I turned around immediately and saw him bent down, with the phone turn up and he pulled it up. i saw video of myself. I was so shocked i couldn’t even think???

2. I asked him what he was doing and he said nothing and begin walking away really fast. I demanded to see his phone, chases after him, grabbed him and tried to retrieve the phone. i saw another glance of video (presumably of me, because I could see white shirt / black skirt / long hair) we were sort of running around w him trying to lock him and get the phone.

3. At one point I got the phone but he twisted my left wrist and snatched it back. This whole scuffle lasted about 1minute so u can imagine the time he had to delete the videos.

(he was running around the whole time, to the extent he slipped twice, all this while fiddling with his phone)

4. After that, he passed me his phone and said ok you check now.
The video attached is after the scuffle and when he passed me the phone. (i didn’t think to video earlier bc I just wanted to get his phone to get evidence of the videos he took)

if u hear closely, he mentioned i was struggling with him, how could he have deleted?

In the first place, if he had just passed me his phone immediately when i caught him, there won’t be any struggle. The fact that he had to run, and me having to chase him and trying to get the phone and getting my wrist twisted in the process showed that there is a lapse of time between me catching him and him passing me his phone.

This lapse of time is when he was deleting those videos he took.

5. His history was deleted, i scrolled through the recent photos / deleted photos / videos and found nothing. i was really really upset because i saw those videos with my own eyes.

6. He told me go ahead and make a police report, even giving me his particulars and walked off. at this point i was really traumatised by the fact that
– I didn’t even realise he was videoing me despite him being in so close proximity
– no one came to help (there were nobody in the nearby vicinity)
– i was so upset about the fact I just didn’t have the strength to pin him down and get the videos which i saw with my own eyes
– as such, there was no concrete evidence: just his word against mine…

At this point I wanted to forget the incident and just go home but..

7. The fact that he was so daring to come right up behind me while i was walking, to the extend that his phone touched my thighs, and i saw his address on his IC (not near where I stay, means he had been trailing me) made me decide to make a police report in case somebody else kena!

8. Police came, made some calls etc. while i was waiting, I sent the photos of him and his IC to my friends and one of them did CSI work and found this https://www.straitstimes.com/…/navy-operations-supervisor-j…

9. Crying now as i write this. Today was suppose to be a good day for me, starting my intern, i was looking forward to getting some studying done when i got home, but instead, i spent the afternoon filing police reports, trying to get clinics to do a medical examination on my wrist (i eventually gave up- GPS don’t fill in reports) and when I walked home after trying to find a clinic to fill the report, i saw a woman w short hair wearing a similar color shirt (blue) i jumped so hard.

10. My wrist is hurting now and i really feel humiliated and violated by his act and feel traumatised by the whole incident especially by the fact that i was so oblivious and it happened in daylight. The fact that a stranger has seen things he shouldn’t without my knowledge makes me feel like i want to vomit. Im really worried that the videos get circulated on forums, as I suspect he still has them (probably sent to someone else) ????????

I really hope that he would be heavily sanctioned / get whatever help he need and that he will not commit such a crime to any other female again.

* pls take into consideration that I’m not a 100% sure that the article is him. But Prima facie it appears to be him. Attached his IC, you guys judge for yourself. (added this at 5:49pm)”