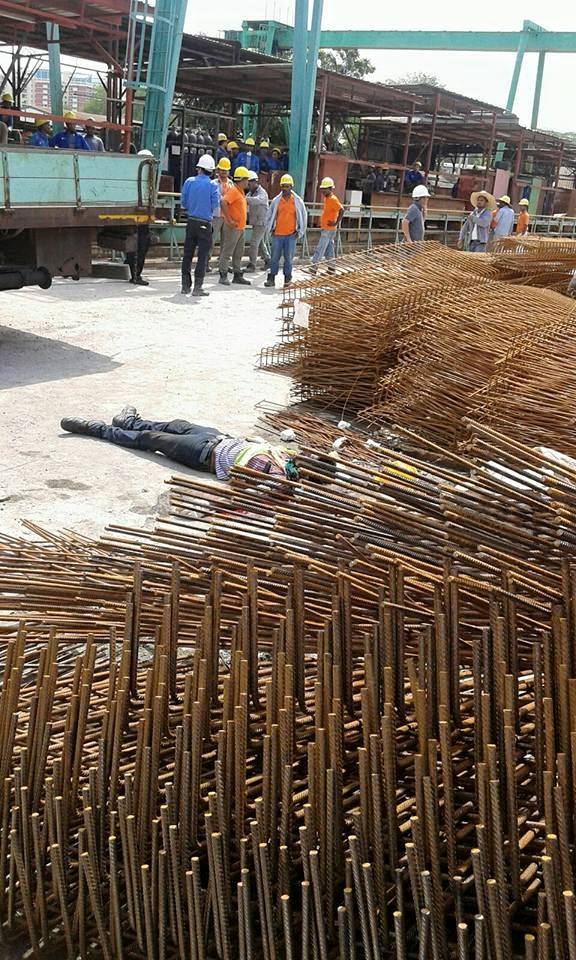 This publication reported on Tuesday (Apr 26) that a foreign worker had died at an accident at his work-site in Tampines. The worker started work at the worksite just 2 days prior. He is from a place called Batlagundu, in Dindigul district in Tamil Nadu, India.
The company in which’s premise the worker died subsequently wrote to us to say that the worker is not their direct employee, but is under the employment of their mesh supplier and that investigations are still on-going for the accident.
A Ministry of Manpower (MOM) spokesperson later confirmed to another publication that the accident happened at the worksite of Sunway Concrete Products, which makes precast concrete products such as columns and lift shafts, and that the the worker suffered fatal injuries after being struck by the wire meshes.
The police also confirmed that they received a call about the incident at 10.58am on Apr 26 and that the victim was pronounced dead by paramedics at the scene.
The MOM spokesperson further said that the deceased was a 24-year-old man and that the accident happened at the worksite of Sunway Concrete Products at 4 Tampines Industrial Street 62.
MOM did not issue a stop work order but instructed the firm to stop all lifting activities on the worksite until investigations are over.
Now, a Malaysian publication has revealed further information about the dead worker. Malaya Chronicles said that the deceased’s name is Venugopal Sarath Kumar. His work permit was issued on 5 Oct 2015.

Venugopal was helping to unload wire meshes from a lorry loader when they fell on him, said the paper.


The newspaper further said that Venugopal was working for Hiap Seng Lorry Enterprises which supplies materials to Sunway, and that the sub-contractor was refusing to pay for the return of the body to the country of origin.

If true, Hiap Seng Lorry Enterprises may be contravening the Work Permit conditions set by MOM which specifies that it should do so.Follow us on Social Media