The Independent Singapore News
Home News Elderly, wheelchair-bound man filmed yelling vulgarities in what appears to be the...

Elderly, wheelchair-bound man filmed yelling vulgarities in what appears to be the National Skin Centre

Two other men and a woman appeared to be trying to calm him down. However, he continued spewing venomous words at one of the men

An elderly man in a wheelchair was filmed hurling vulgarities at the staff and people around him at what seemed to be the National Skin Centre.

The video which was making its way round social media today, showed the man wheeled to a counter. He was surrounded by two other men and a woman who appeared to be trying to calm him down. However, he continued spewing vulgarities at one of the men.

In between his bouts of rage, he told one of the men, “Don’t talk to me, I don’t know you”.

Another man can also be heard in the background of the video yelling, “Don’t tolerate, call police”.

When the security guard, a Muslim woman, arrived, he told her in Malay, “Kak, tak boleh dengar”. This roughly translates to “I cannot hear”.

He also told her “Saya chakap ini macham, I cannot hear”, probably indicating that he told staff there that he could not hear.

When she tried to move him away, he scolded the security guard as well, before demanding for his appointment from staff at the counter. Only after this did he allow himself to be wheeled away, while yelling vulgarities all the while.

The reasons for his outburst is unknown.

Those who commented on the video expressed no sympathy for the man. 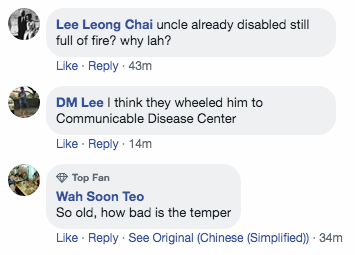 The full video can be watched here, at your own discretion./TISG