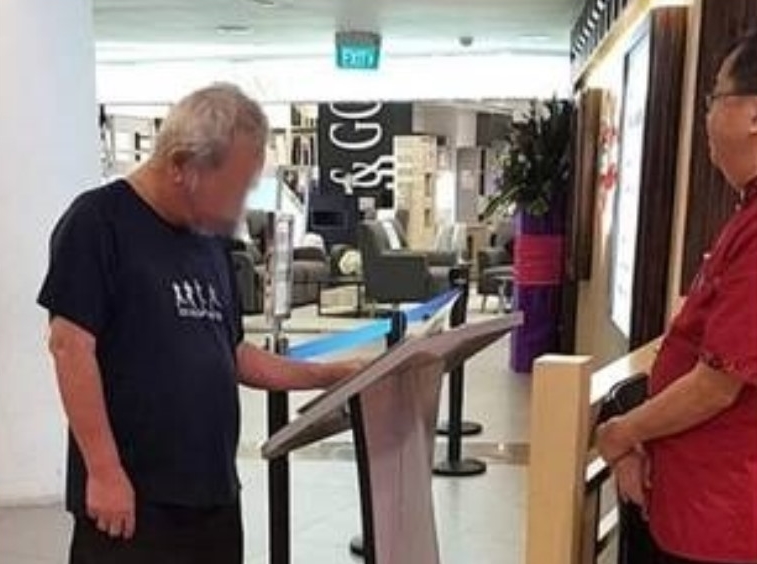 An elerly man who appears to be in his seventies has allegedly racked up over $300 in unpaid bills after he dined without paying at almost every restaurant and eatery at Sun Plaza, in Sembawang, for almost one month.

A reader told the Chinese daily that the he had spotted the white-haired senior dressed in a t-shirt and shorts walking around the shopping centre and occasionally visiting the eateries at the 1st and 3rd floors of the mall.

The reader reported that the senior would come up with several reasons to avoid paying the bills and even stole away from the restaurants when staff were not paying attention.

One employee from the ‘Lao Huo Tang (老火汤)’ restaurant on the third floor of Sun Plaza told reporters that the senior has been to the restaurant at least five times and dined without paying since more than a month ago.

The employee who declined to be named revealed that once, the man even asked for meals twice in the same day: “At first, when we saw that he had no money to foot the bill, we put him on the tab. He even agreed to return two days later to pay the money. However, we didn’t expect him to reappear on the same afternoon. Not only did he not bring money with him, he even asked for another meal.”

The employee further reported that the elderly man sat in the restaurant for 30 minutes and refused to leave until the restaurant boss had no choice but to offer him free food, under the condition that he leave the premises.

Over ten F&B businesses, including a bak kut teh restaurant at the first floor of the mall and the food court on the third floor, told reporters that the elderly man pulled similar stunts at their eateries.

An employee at a Japanese restaurant added that the man ordered more expensive menu items, when he visited the restaurant twice and incurred bills of about $25 and $48, which he did not pay.

The Japanese restaurant staff said: “We informed mall security to take him away, but did not call the police.”Follow us on Social Media