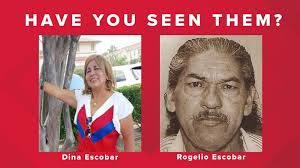 A 61-year-old woman who went to search for her missing brother in his house has mysteriously disappeared as well. Her brother, Rogelio Escobar, 65, was last seen Sunday, August 26, 2018.

Escobar left home on foot. He walked with a limp, but always kept to a schedule – which included going to a corner store. When he did not come back home for three days, his sister, Dinora Escobar, went over to his house to look for him on August 28, and vanished too.

Dinora Escobar’s daughter says it’s not like her mom to go days without contacting her family. Her mother’s car is also missing.

“She’s very close to all of us,” she said. “We have group text messages where we’re always sending pictures to each other. (Saying), ‘How was your day?’ Goodnight.”

The police and a professional search and rescue organization embarked on a fruitless searched for the missing siblings on Saturday. Houston Police say homicide investigators are involved in the case and urged anyone with information to contact the Houston Police Department.

Dinora Escobar’s daughter said that she has a really bad feeling that they would have gone missing for so long and not inform anyone. She said that she has her suspicions, but says first they need to find the missing car, or get some sort of lead.Follow us on Social Media