The Independent Singapore News
Home News Drunk driver of Singapore-registered BMW which burst into flames after accident in... 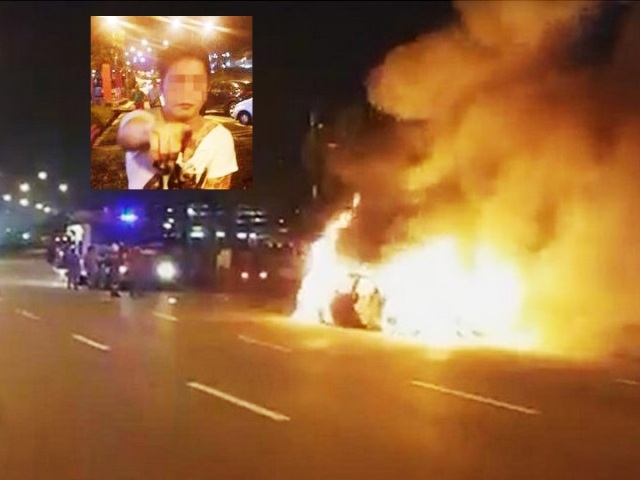 A Singapore-registered BMW 740 was involved in an accident with a Malaysia-registered motorcycle in Johor Bahru early yesterday morning at about 4.25am. The BMW driver is suspected to have been driving drunk at the time of the accident.

The BMW which crashed into the motorcycle along the Tebrau highway dragged the bike for about 300 metres. Fortunately the motorcyclist fell off his motorbike before the car hit him and dragged the vehicle. He sustained only minor injuries.

Facebook user Kevin Chia who witnessed the incident, said the car sped past him with its wheels on fire before it finally came to a stop. He said the car then burst into flames.

Kevin, a taxi driver, said that before he could get out of his car to offer help, there were already four or five people pulling the BMW driver out of his car. The drunk driver however started scolding those that came to his rescue which led to them giving him a good beating. The motorcyclist ie believed to be among those that assaulted him.

Kevin said: “They punched and kicked him. One person was even hitting him with a wooden rod. The situation turned quite chaotic.”

The crowd only stopped attacking him when Kevin intervened and stopped the crowd from attacking the BMW driver.

Kevin said the BMW driver was pleading with the crowd saying, “I’m sorry, please don’t hit me,” when he went to the driver’s aid. He could hardly speak properly Kevin said.

Firefighters who responded to the accident soon quelled the fire. Police are investigating the incident.Follow us on Social Media