Doctors Suspended for Using Severed Leg as a Pillow in India 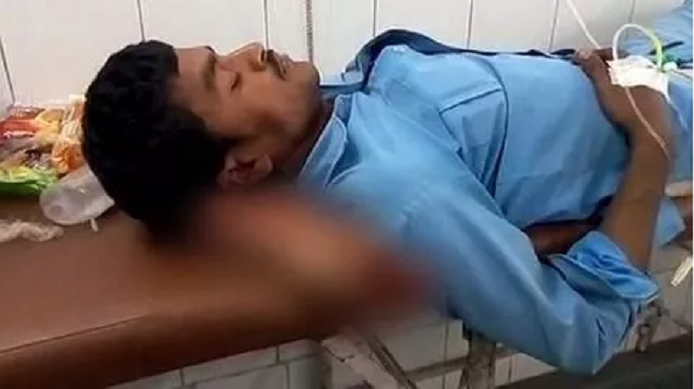 An official for the government hospital Maharani Laxmibai Medical College and Hospital in Uttar Pradesh, India,  announced an investigation on March 11 after reports surfaced that the severed leg of a patient had been used as a pillow under his head. The two doctors involved in the case have been suspended.

Pictures of the patient lying on stretcher with his leg holding up his head have emerged. Sadhna Kaushik, the hospital’s head, announced that a committee of four persons are investigating the matter to determine exactly who used the severed leg as a pillow, and has promised that strict action will ensue in the event that a hospital staff member is discovered to be behind the gruesome occurrence.

The patient, a 28 year old man who goes by only one name, Ghanshyam, had been in a bus accident and sustained grave injuries. Ghanshyam’s relatives claim that they had repeatedly asked for a pillow for the patient, but were disregarded by the staff of the hospital.

Upon their arrival at the hospital, they discovered that his head was resting on his severed leg. Janaki Prasad, a relative of Ghanshyam, told a local news outlet, “I repeatedly asked the doctors to intervene but they refused,” and so some relatives themselves bought Ghanshyam a pillow.

However, according to Ms. Kaushik, it was actually a relative who placed the leg as a headrest for Ghanshyam, and that the patient received immediate medical assistance from hospital staff. She told the Press Trust of India, “The doctor looked for something to raise his head. The patient’s attendant used the leg.”

Government hospitals in India severely suffer from a lack of funding, staff and equipment, with millions of patients being attended to by only a few specialists. The incident occurred in one of India’s lowest-income areas, Uttar Pradesh, where 200 million people live, and where those who need medical assistance often have to endure long queues even for minor ailments. It is also not uncommon to have incidents of medical negligence in this state.

In 2017, at a state government hospital, a shortage of oxygen caused the deaths of scores of children. And just last month, a doctor with no license was arrested, since he had reportedly infected 46 people with HIV when he re-used a syringe.Follow us on Social Media