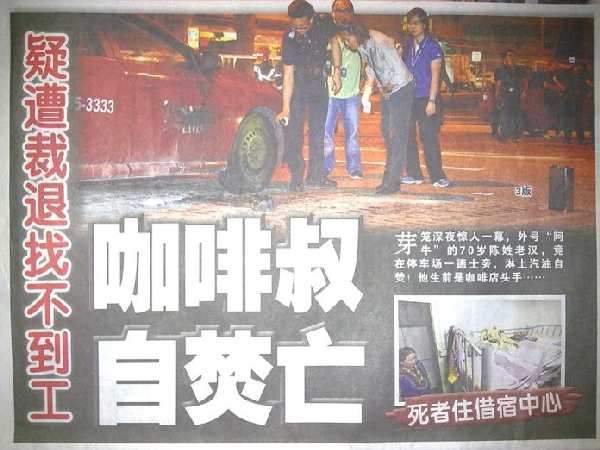 A local Chinese newspaper has reported that a 70-year-old man set himself on fire in a carpark at the junction of Geylang Lor 19 and Lorong Bachok last night (1 June) at around 10pm.
Witnesses said that he stood next to a taxi and poured a flammable liquid on himself and set himself on fire. They also said that there was a loud explosion soon after the man set himself on fire and that the fire shot up very high. Passers-by eventually put out the fire using a fire extinguisher from a nearby coffee shop, after the man had been burning for about 4 minutes.
The man’s arms were outstretched as he was burning and he was shouting “Ahhhh!!!!”, witnesses said. His clothes and hair were all burnt out by the fire. Ambulance arrived in about 10 minutes after the incident.
The New Paper reported that the man suffered severe third-degree burns but that his condition is unknown. The paper also reported that he was a known figure in that area, and that he plays Chinese chess nearby often.
All Singapore Stuff said that the man is a Singaporean and that he set himself on fire because he was distressed that he could not find another job after being dismissed recently from his job, which paid him $1000 monthly. Others who claimed to know him said that the old man was supposed to turn up for work that day but did not. He reportedly went around thanking his friends who had loaned him money before setting himself on fire.
Police have confirmed the incident and have said that investigations are ongoing.Follow us on Social Media