Dictators & mass murderers seeking medical care in S’pore – should they be welcome? 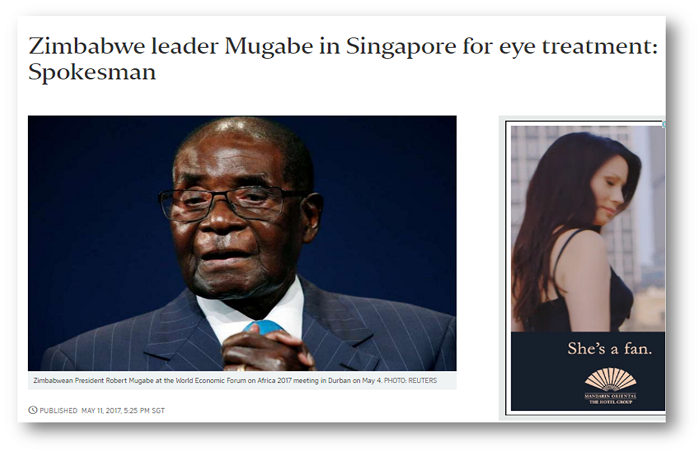 It was a news item which perhaps many did not pay a second look but which nevertheless raises questions of propriety and ethics of how we treat those guilty of brutal crimes such as mass murders.

On 11 May, the Straits Times reported that Zimbabwe strongman Robert Mugabe was in Singapore “seeking advanced treatment in Singapore for eye problems caused by old age that can make it look as if he has dozed off in public.”

This, the report said, is the African president’s second trip to Singapore in two months for medical treatment.

“At 93, there is something that happens to the eyes and the President cannot suffer bright lights. If you look at his poise, he looks down, avoids direct lighting,” Mr George Charamba, the president’s spokesman said.

“It (the trip to Singapore) has to do with his eyes and often I have felt very, very pained. In fact, I feel like a failure when there is this reading that the President is sleeping in conferences – no.”

Mr Mugabe is said to travel to Singapore also for other matters in previous years, such as for shopping sprees, where his family would also tag along.

The Government has remained silent on this and has not made any public statement on Mr Mugabe’s travel plans. It is also unclear if he meets with government officials on such trips.

Mr Mugabe runs a brutal government which has murdered thousands for decades. The 93-year old himself has ruled the country for 30 years, since 1987.

Singapore is a favourite treatment centre for those who are seen by the international community as pariahs, including Burmese generals before democratic rule was reinstalled some years ago.

In 2007, for example, Burmese generals such as Than Shwe, who were responsible for murders and violent crackdowns of opponents and dissidents, including monks, sought medical treatment in Singapore too.

Then Myanmar prime minister General Soe Win, 59, was treated for cancer at Singapore’s General Hospital for months before he reportedly died on Oct. 2.

When questioned about this then, Singapore’s Prime Minister Lee Hsien Loong said denying them medical treatment would be inhumane.

“I mean, somebody is sick, he wants to come to Singapore, he needs treatment and you’re telling me that I shouldn’t treat him because he’s not a good man?” he told CNN.

But when it comes to others such as the refugees from Burma’s ethnic cleansing war against the Rohingyas, the government’s position is unequivocal: we do not accept refugees because Singapore is too small to do so.

“As a small country with limited land, Singapore is not in a position to accept any persons seeking political asylum or refugee status, regardless of their ethnicity or place of origin,” said an MHA spokesperson, in response to queries from Channel NewsAsia in 2015, in light of the crisis in Burma.

It was the same response in 2012 when 40 refugees sought refuge in our shores.

Is Singapore’s position tenable – that murderers generals are allowed to freely seek shelter and treatment here, while refugees who face real threats of being killed, often by the same dictators whom we grant shelter to, are turned away?

Is there a moral, ethical question we should be be asking?Follow us on Social Media