Death of 12 patients in Hep C outbreak: Minister clarifies that pain and regret are greatest punishment senior staff have to bear 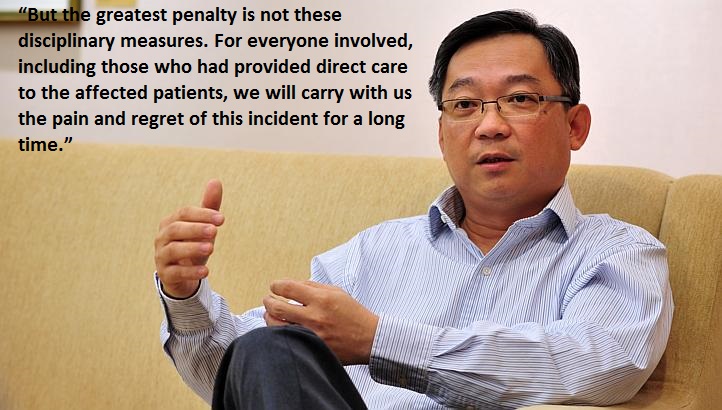 The Health Minister in his response to Non-Constituency Member of Parliament Leon Perera, refused to disclose the names and the specific punishments meted out to them with regards to the Hepatitis C outbreak in Singapore General Hospital (SGH) which claimed eight lives.
The Minister, Mr Gan Kim Yong arguing that such disclosures would not contribute to better care of patients said that focusing on naming the individuals will develop a “blame culture in our healthcare institutions.”
Mr Gan emphasised that his Ministry wants “to encourage a learning culture to make our hospitals as safe as possible for our patients,” as “this culture of continual learning and improvement is important for enhancing patient safety and the quality of care.”
The Minister clarified that “when a warning is issued, it is lodged in the staff’s service record. A stern warning is a more serious penalty. Not only is it entered into the staff’s service record, it has a negative bearing on his career, including future promotion and awards. A warning or stern warning may be given together with a fine.”
Mr Gan further argued that the greatest penalty for the four director-level officers from Ministry of Health (MOH) and the twelve senior management staff of SGH is not the actual punishments which were meted out, but the pain and regret of the incident they would have to carry with them for a long time.
“In deciding what to disclose, we have to bear in mind the longer-term impact on our healthcare system and healthcare workers, and strike a careful balance,” he added.