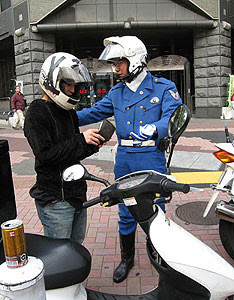 By: Chris Kuan
Some years back, yours truly received a letter requiring my presence in answering an expressway speeding offense. The trouble was the offense took place about 150km from my home in western Tokyo and I was required to report to the police headquarters closest to the “crime scene”.
Long journey to the relevant police headquarters where I was greeted politely by the officer in charge who told me that an English interpreter had been hired at the police’s expense. It turned out that the interpreter’s English was not that much better than my Japanese. Nevertheless the interview went smoothly. Some weeks later I was summoned to a district judge to admit my guilt. JPY 70,000 fine and 8 demerit points. Thought the ordeal was over.
Nope. A letter arrived 3 months later requiring me to undergo driving lessons at an approved driving school. I duly missed my appointment as I was away overseas for a project. Another letter came requiring me to sit for driver’s examination. Oops, better get acquainted with the Japanese highway code. Fortunately, there was an English version. Studied it and confidently sat for the exam. But I did not expect the poor English translation of the questions. To cut to the chase, I struggled to complete the exam.
My name was called out at the waiting room – the officer duly informed me that I failed to make the 80% pass grade. Therefore my Japanese driver’s license was cancelled. Big trouble.
Suddenly, my missus who is usually calm, cool and collected, began to harangue the officer for the bad English translation of the exam. To my utter amazement, the police bowed and apologised for the bad translation. He asked if there was something he can do to rectify the situation. I said I still have my UK driver’s license from which my Japanese driver’s license was adapted. To my surprise, he said he could not be sure because it was not his department but asked if I should try and re-apply for a new Japanese license with my UK license.
We thanked the officer for his suggestion, went to get a Japanese translation of my UK license and in an hours’ time, walked away with a spanking new license and no demerit points!
2 years later, I got booked for straying into the bus lane at peak hour. Got a JPY 10,000 fine and 3 demerit points. Bother.
A year later, license renewal time. A simple matter? Nope, because of the bus lane offense, I had to sit in a classroom listening to a traffic police officer droning on about traffic safety for 3 hours. The others in the classroom were either sleeping or staring into their smartphones. After he finished, the officer called out the names and I duly received my new license.
Moral of the story, Japan ain’t Singapore and the time wasted when you commit a traffic offense is much worse than the fine.Follow us on Social Media