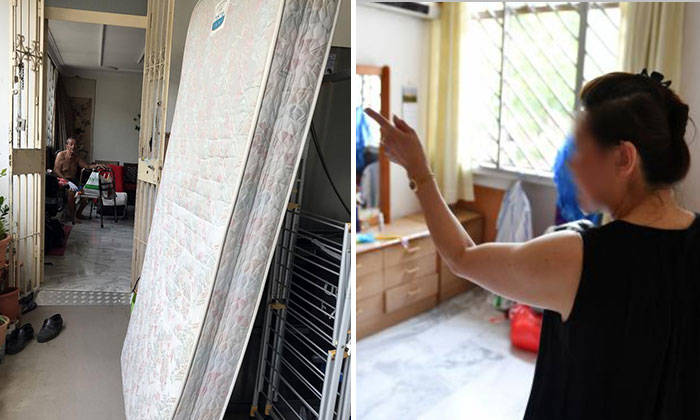 Unhappy with her elderly parents for not siding with her in a family dispute, a daughter hired movers to clear out her parent’s home.

The elderly father, 82-year-old Mr Lin, told the Chinese daily that he and his wife had two sons and three daughters, and that his eldest son dies from a liver disease on 28 Sept.

The family feud began when the fourth child, Miss Lin, took issue with the fact that the sons of her eldest sister did not attend their uncle’s funeral. When she voiced her frustrations to her father, she was told to let it go.

“My eldest son has just passed away and we’re still grieving, when she (Miss Lin) called to complain that two of my grandsons didn’t come for the funeral.

“I wasn’t in a condition to handle the situation and told her it was a small matter.

“However, she flared up and accused of favouritism.

“She said she won’t be visiting anymore and wanted to take away all the furniture which she had contributed to the house.”

The unsatisfied daughter made good on her threat when she hired movers to clear out her parents flat last Wednesday (Oct 18), around 5pm.

Reporters who made a visit to the home last Friday found the elderly couple seated on chairs in the living room while Miss Lin was busy directing the movers. Reporters also witnessed the father and daughter arguing while they were there.

Mr Lin admitted that his fourth child had a temper which other family members had to put up with. He added:

“She was scolding us as she continued moving the furniture out from the house. She also threw some items to the ground.

“Fearing for the safety of my wife, maid and two other daughters, I called the police.”

When contacted, the police confirmed the incident but said that further assistance was not required.

Mr Lin’s eldest daughter elaborated that Miss Lin and her husband had moved houses years ago and requested her parents to store their old furniture at the time:

“Now that they’re having an argument, she (Miss Lin) is laying claims to furniture in the house, saying that they belong to her.”

As for Miss Lin, she told reporters that she was enraged when she found her family having a talk about her, when she made a visit on Deepavali, while sitting on furniture she had bought.

She also claimed to be a filial daughter who would accompany her parents to the supermarket almost every week, besides ferrying her parents from Bedok to Jurong East to visit her eldest brother who was severely ill. She added:

“I really cannot stand the lack of care my siblings show to my parents. My husband was also the guarantor for the maid.

“Although all of us paid for her services when my eldest brother passed away, they suddenly stopped.”

She claimed to be stoked when her family members decided to send away the maid she had arranged to care for her parents.

Besides this, Miss Lin stressed that her nephews cited “ridiculous” reasons for their absence during their uncle’s funeral, with one claiming that he had to attend a prior appointment while the other said he needed to stage a performance that day:

“I found it unreasonable and told my father, but he ignored me and even chased me out of the house.”