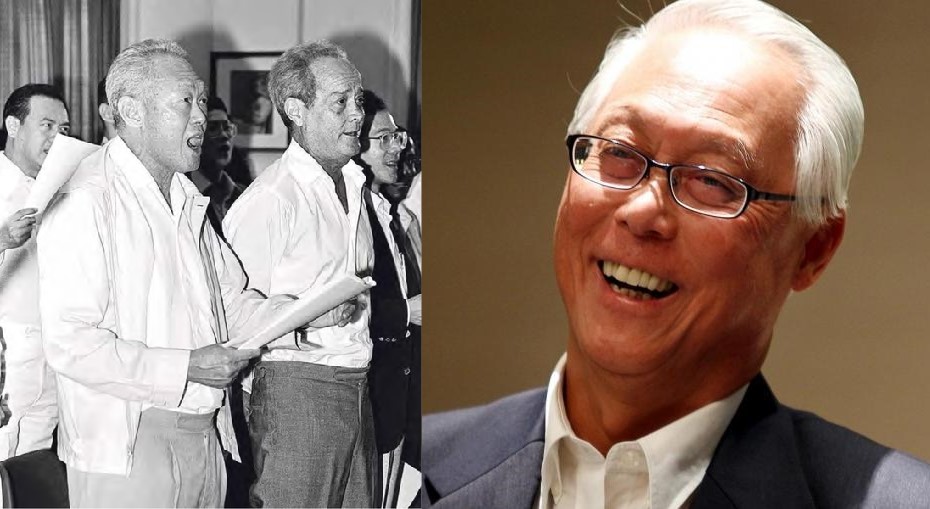 The daughter of Singapore’s very first Law Minister has weighed in on the heated discussion over ministerial pay that was sparked by comments Emeritus Senior Minister Goh Chok Tong made recently, calling ESM Goh’s views on the matter offensive and “insulting” to all the founding fathers of the nation.

This, after ESM Goh responded to a 70-year-old Singaporean’s question at a forum last week and shared his views that ministers are not paid enough and that Singapore would pay the price of having “mediocre” leaders if only those who earn half a million dollars thrown their names into the hat for political office.

Responding to the elderly Singaporean’s suggestion that the Government could perhaps consider slashing ministerial salaries by 10 per cent in order to accommodate an elderly pension fund, ESM Goh said in part:

“If you had suggested we up GST by 2 per cent, I would have applauded you. Seriously. Because you’re taxing the whole society to support the older ones. But you did not.

The backlash that followed was so swift and so severe that ESM Goh responded to the heated debate on social media and clarified that salaries are not the starting point in minister recruitment and that he does not “mean nor believe that Singaporeans at whatever level of income are mediocre”.

Amid the public uproar over ministerial pay, the son-in-law of one of Singapore’s founding Ministers, E.W. Barker, has shared a message from his wife, criticising the ESM’s views on the topic.

Barker, born Edmund William Barker, is a Eurasian Singaporean was elected a member of the Singapore Legislative Assembly in 1963 to represent the constituency of Tanglin – a ward he served for 25 years or a quarter of a century, until 1988.

One of the old guards of Singapore, Barker served as the Speaker of the Legislative Assembly from 1963-64 and in 1964, he was appointed as the very first Minister for Law – a post he held until 1988.

Barker, fondly known as the People’s Minister, retired from politics in 1988. He passed away in 2001 and is survived by his wife, his four children, their spouses and his grandchildren.

Passing a message from one of Barker’s children, Gillian Barker, Gillian’s husband revealed on Facebook that his father-in-law – a Cambridge-educated lawyer – took a hefty 70-80 per cent pay cut to serve the people when he entered politics.

In a comment on Facebook, Gillian’s husband Hans Olijve wrote that his wife is “deeply offended” by the idea that lower pay will only result in mediocre leaders, like ESM Goh suggested, and asked what happened to the idea of public service:

“My wife is deeply offended by the idea that low pay attracts mediocre people. By saying that you are insulting all the founding fathers who took low pay but put our country on the path to the phenomenal success it has achieved. Their sacrifice, our gain.

“If they need an excuse for high pay, perhaps one that doesn’t insult the people who came before them might be a better alternative. What happened to the concept of public service? If money is what you want then go out into the world and make some. Government should be about the people you serve.” 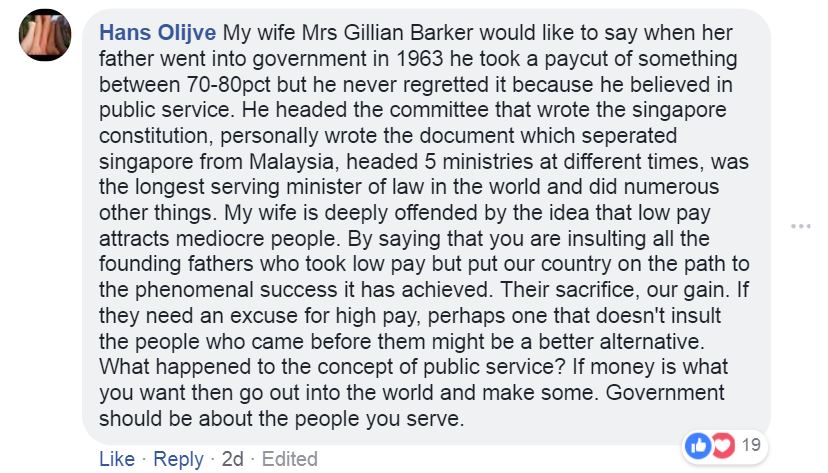 https://theindependent.sg.sg/ministers-are-not-paid-enough-esm-goh-chok-tong-slams-suggestion-to-fund-elderly-pension-scheme-by-cutting-ministerial-pay/Follow us on Social Media