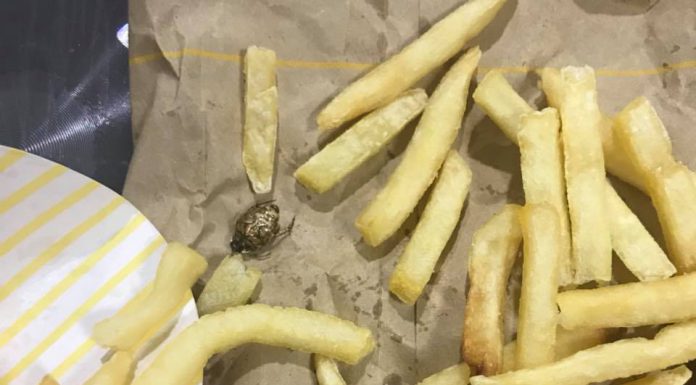 A customer was disgusted to find a deep-fried beetle in a packet of French Fries that was part of her McDelivery order was dispatched to her from the McDonald’s outlet at Block 684 Hougang Avenue 8, on Sunday (11 Mar).

The customer, Lishi Chen, reported the matter to McDonald’s on Facebook and wrote: “Hi McDonald’s, I just ordered McDelivery and I found a deep fried insect in my fries. This is totally unacceptable. I would like an explanation from you.”

The fast food chain has since replied and has asked for Chen’s contact details so they can get in touch with her:

This is not the first such incident in McDonald’s deliveries from Hougang outlets. In 2015, a customer allegedly wound tiny worms in a Sausage McMuffin that came in his Big Breakfast set, that he ordered from the McDonald’s outlet at Block 208, Hougang Street 21.

The National Environment Agency (NEA) investigated the matter and did not detect any hygiene lapses at the outlet: “There were no expired products found, food items were found properly stored, and there were also no signs of pest infestation on the premises.”

This went in line with McDonald’s confirmation that independently contracted pest control agencies did not find any evidence of pest infestation at the outlet or at its suppliers’ premises.

McDonald’s later cited the results of a laboratory analysis and said that the worms found on the sausage patty were two to three days old. This means that it is unlikely for the worms to have been born in the time after the food was cooked and delivered. Patricia Yong, director of operations at McDonald’s, added that it is also not likely for the worms to have survived the chilling or cooking processes employed at the fast food outlets.

The affected customer, IT freelancer Jasper Lee, responded: “I appreciate McDonald’s efforts to ensure its food quality has not been compromised, even though it’s not really a satisfactory answer for me as they still can’t address the issue of where the worms came from.”