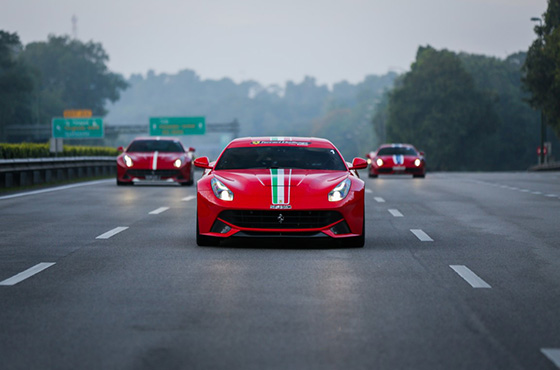 A convoy of 70 Ferraris have descended upon iconic Singapore streets like Orchard road as it covers 70 kilometers racing past the nation’s most iconic landmarks, as part of the brand’s 70th anniversary celebrations.

Dubbed the Parade of Passion by organiser Ital Auto Pte Ltd, the official distributor of Ferrari in Singapore, the convoy set out from the F1 Pit Building in Marina Bay, zooming past Orchard Road, Marina Bayfront, the Esplanade and Benjamin Sheares bridges before concluding the parade at Sentosa.

Residents captured the parade and some of the cars getting clogged up in weekend Orchard Road traffic:

The LaFerrari Aperta, the newest limited edition special series of the brand, made its debut at the event supported by the Ferrari Owners Club. The latest Ferraris join classic models in the biggest show of Ferraris the city-state has seen.

Lest you believe the show is simply about showing off luxury cars, Ferrari has said that the parade also has a philanthropic component as it sought to raise funds to support the underprivileged in partnership with the President’s Challenge, as part of the anniversary celebrations.