Construction workers and site safety personnel get into a fight 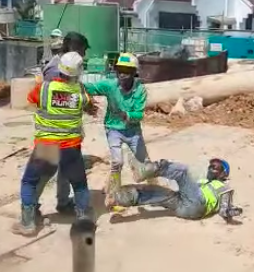 A video of a construction worker and site safety personnel fighting has gone viral.

In the video uploaded by one Zaid Khan to popular Facebook group ‘Complaint Singapore’, two men get into a fight which leads to a scuffle among several men.

The 49-second-long clip starts with a tall man in grey asking a construction worker to “Go”.

The construction worker, also clad in grey – but wearing a safety vest – can be heard shouting to the bigger man: “Why go? You go”.

This seems to anger the taller man, who slaps the construction worker, leading to a fight between the two.

TISG understands that the taller man, who was not wearing a safety vest like the rest, is the site supervisor.

Throughout the video, the men could be heard cursing in Hokkien.

The two men were fighting in the middle of a construction site, with rocks, stones and even metal rods protruding from concrete slabs.

As the construction worker was restrained by others, he attempted to pick up rocks along the way to throw at his supervisor.

The clip ends with the construction worker asking off-camera: “I start the fight first?”

Netizens commented the men had quickly gone local, for though it was unlikely they were Hokkien speakers, they were able to curse in the language. /TISGFollow us on Social Media