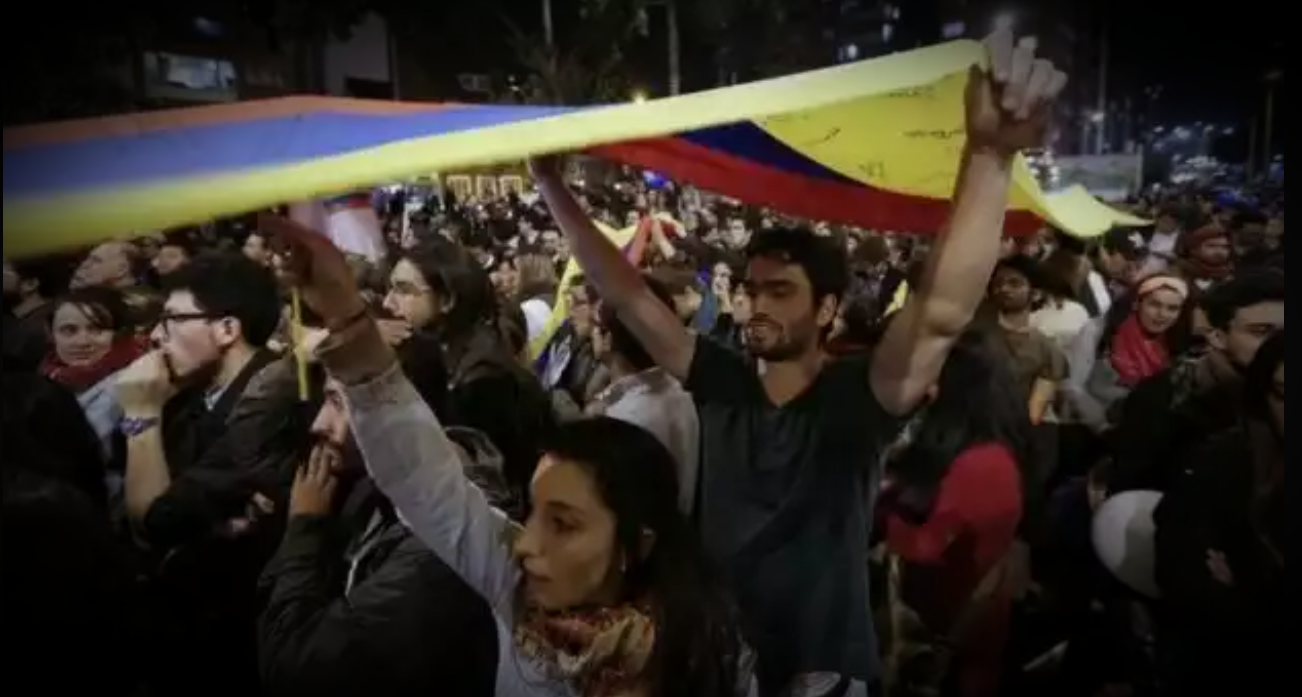 A peace deal intended to end the country’s civil strife is now in limbo after getting narrowly rejected by voters.

A peace deal intended at ending Colombia’s civil war is now in limbo after voters rejected it by a razor thin margin. Tens of thousands of protestors have marched urging their country not to return to civil war after the rejection of the peace accord.

Colombian President Juan Manuel Santos is attempting his luck to save the peace deal after the two sides have said they are pressing on with the peace effort. He has been supported by protestors who demonstrated in 14 cities demanding that the deal be salvaged. Recently, he announced that he would extend a bilateral ceasefire between the government and the Revolutionary Armed Forces of Colombia (FARC) until the end of this month. Bottom of Form

Many Colombians felt that the peace deal, reached after years of negotiations, was too soft on the guerilla rebels who may be guilty of war crimes. About 260,000 people were murdered, kidnapped and millions displaced in the 52-year conflict.

Colombians voted on 2nd October in a “yes” or a “no” referendum where they narrowly rejected the peace deal signed between the government and left-wing FARC fighters. The result is a major blow to the peace process. Controversial issues such as the political participation of alleged war criminals and their ability to avoid conviction was incorporated in the referendum.

Santos had said there was no contingency plan if voters had rejected the peace accord. He has staked his presidency on the peace deal. A “yes” vote would have ended the 52-year conflict and may have provided the FARC legislative seating in the parliament.  The vote failed by a narrow margin of 50.25 per cent to 49.75 per cent.

The ‘no’ camp, who opposed to the deal, demanded that the FARC leaders should serve their sentence for crimes committed and those found guilty of crimes will not be allowed from running for public office. They have also demanded that no changes should be made to their country’s constitution.

Government representatives have already returned to the Cuban city of Havana for further discussions with FARC leaders. Santos insisted that peace was “close” and that he would carry on meeting critics to try to salvage the accord. For their part, the FARC have said that “peace is here to stay”.

One of the critics includes former president Alvaro Uribe. The former allies became rivals after Santos decided to negotiate with the FARC. Santos’s meeting with Uribe was believed to be unprecedented since he was sworn in as president in 2010.

Uribe said that the failed peace deal with the FARC was ‘weak’ after having a meeting with Santos. He added that the accord wasn’t inclusive for everyone.  The former president, who led the “no” campaign, had a big hand in mounting against the peace deal in the rural areas that have long lived under the threat of a guerrilla takeover

Uribe managed to reduce the FARC’s ranks during his presidency from 2002 to 2010. He is popular by the country’s traditional conservatives, especially the rural villagers who have been subjected to guerrilla attacks.

The peace deal was reached after four years of formal talks in Havana between the government and FARC negotiators. From early on in the talks, Santos said he would put the final agreement to the Colombian people in a “yes” or “no” referendum. Polls had predicted the deal would be approved by a comfortable margin, but the result was a big blow since the deal was rejected by 50.2% of voters.

The FARC was formed in 1964 with the objective of overthrowing the government and establishing a Marxist regime. The FARC was its best-equipped during the 1980s/1990s with as many as 20,000 fighters. The organisation attached itself with the drugs trade in order to improve its financial position especially in the cocaine trade.Follow us on Social Media