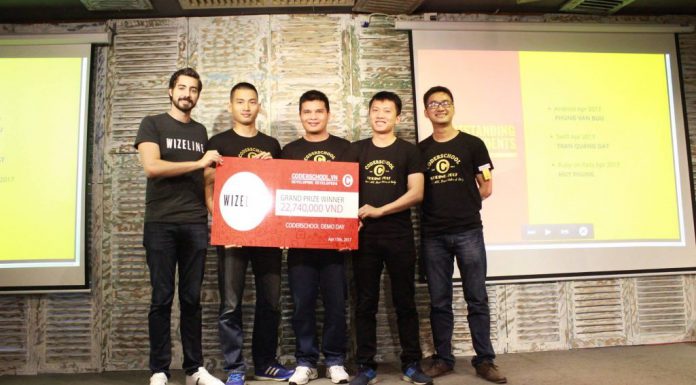 Where do you go when you’re looking for fresh ideas from developers who learned how to code for free within eight weeks?

It may sound impossible (Eight weeks? Free?) but that is exactly what you’ll find at the 8th Demo Day of CoderSchool.

When CoderSchool launched in 2015, providing free classes for developers is a concept new to the industry that people were curious about it. A little over a year later, they have ingrained themselves into Vietnam’s developer and startup communities with 14 classes run and close to 200 alumni.

Also read: [Infographic] The Echelon Digital Platform: What it is and how to use it

After each eight-week class, CoderSchool holds the Demo Day, a graduation ceremony, projects exhibition, and party all in one. The demo day is the chance for the programme graduates to show off their skills and potentially get hired by any of the Demo Day attendees, which usually include representatives from tech startups and enterprises, as well as potential investors.

Last April 14, after eight weeks of hard work, 13 groups of 50 students had their own booths and pitched their projects to the judges and the visitors of the 8th Demo Day.

Also read: Now in Vietnam: Vietnam’s Alibaba is building an ecosystem around commerce and fintech

Previous Demo Days used to showcase a pitching competition. But this demo day is different, as it is the first time teams featured project booths, with each team having their own booth. The judges visited each booth to give their score and feedback. It made the place quite messy but very effective; people can interact directly with what the teams are working on and have more understanding about team background and story.

You might think that the projects from a group of developers who only had around 100 hours of developing couldn’t be good, but CoderSchool students just prove it wrong. Under the instructions of CoderSchool mentors, the projects are not only a couple of lines of code but are completed products with creative ideas, good user interface, and potential to be launched. It was really interesting that we did go through all the booths to learn all about their ideas and products.

CashLive – A live-streaming platform for sellers

The backgrounds of the students are also very interesting; some had never worked on mobile development before, and there are even some who did not have any previous experience in coding. But that was proven to not be a hindrance, especially by the Grand Prize Winner WeRun, a platform for sharing and exploring sport activities around one location in real time. The developers behind WeRun, despite having young families (two busy married men with two kids each) and having little to no previous experience building a mobile app, finished the project in 4 weeks. It will launch soon.

“My job is Technical Sales, this is the first time I work on a mobile app project”, Long – Developer of WeRun

In today’s digital landscape, developers are the most precious resources of any tech startup, and getting good developers is a big challenge we face everyday. But with over 3,500 candidates from Vietnam applying for their courses, 14 classes, and an alumni count that would soon reach 240, CoderSchool makes an impact in growing the developers community in our startup ecosystem.

Congratulations to CoderSchool for the successful Demo Day! We look forward to more classes and events from CoderSchool as they work on their mission of “Developing Developers.”

Disclosure: e27 is an official partner of CoderSchool for the 8th Demo Day