The teenager opined that the fake hike was reasonable, especially because of improvements in Singapore's transport system.

This week, the Public Transport Council (PTC) announced that bus and train fares will go up by a steep seven per cent for adult commuters and four per cent for concession groups. The seven per cent fare hike, which is the highest fare increase since 1998, was the maximum allowable increase under this year’s fare review exercise.

Both SMRT and SBS Transit applied for the maximum fare increase. PTC chairman Richard Magnus revealed that the fare hike would allow fare revenue to rise by about $132.5 million, with SMRT Trains earning about $40.2 million more in train revenue and SBS Transit Rail earning about $18.8 million more while bus fare revenues will increase by about $73.5 million.

Singaporeans responding to the latest fare increase also pointed out that the fare hike comes months after the profits of SBS Transit surged by a hefty 70 per cent to a record S$80 million.

“I think the increase in bus and train fares is reasonable. With rising fuel prices and general inflation, it makes sense that if we want to enjoy a certain standard of living and get better facilities, we need to pay more. I mean, you can’t have your cake and eat it too.

“As much as we make fun of our transport system, it has definitely gotten a lot better. I always use the purple line and I have never been late because of a public transport fault. We even have buses with charging ports and Wi-Fi now.

“The situation has gotten a lot better and if we want to keep the ball rolling, we need to be ready to give a little.

“As for polytechnic students finally getting student concessions, I’m glad we’re finally recognised as students. Paying the adult price has always created a dent in my allowance, so I guess there’s a silver lining, though only for my last year in poly.”

Netizens responding to the student’s views pointed out that the fare hike is also attributed to increased operating costs due to maintenance and asked her to check oil prices before making generalisations:

Others said that the teenager would not feel the burden of the fare hike since it is likely that her parents would bear her travelling expenses and criticised the youth.sg post as being government propaganda: 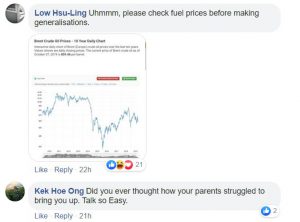 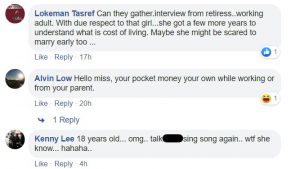 Asserting that rail operators SMRT and SBS Transit have been operating at a loss and have lost millions due to the increased expenditure in running public transport, Mr Khaw asserted that the PTC fare adjustments were not implemented to the full extent of what the formula allowed until recently and that “we must have the discipline to implement the formula fully.”

Singaporeans sharply criticised the Minister for making an assertion that the people need to compensate for the high operating costs especially when transport costs rose to improve public transport reliability in the wake of the many train breakdowns and service disruptions in recent years.

Some agreed that this was an example of “privatising profits and socialising losses,” while many others called on Mr Khaw and the top management of SMRT and SBS Transit to reduce their large pay packages to compensate for the subsidies and operating costs themselves. /TISG

Bus and train fares to go up by the maximum 7 per cent: Public Transport Council confirms