The Independent Singapore News
Home News Cleaner stabbed pregnant wife who used to be a sex worker, after...

Cleaner stabbed pregnant wife who used to be a sex worker, after mistaking that she was talking to pimp 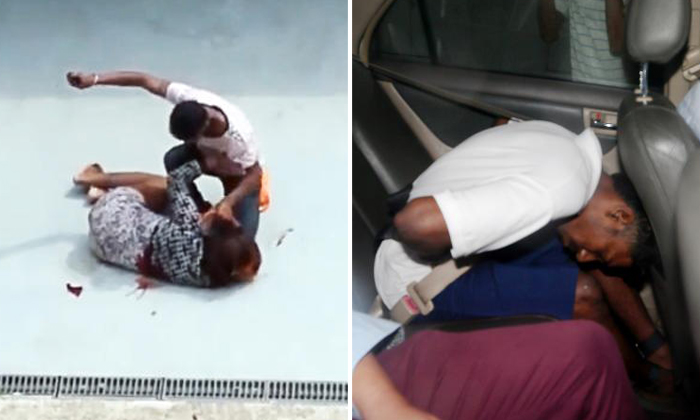 A 30-year-old cleaner, Jayselan N Chandrasegar, was sentenced to seven years jail and six strokes of the cane this past Tuesday, after he stabbed his pregnant wife’s abdomen twice before slashing her back in a horrific attack last year.

The court heard that Jayselan was enraged after he saw his wife, Mayuri Krishnakumar, talking to a man. Believing that the man is a pimp because his wife used to be a sex worker, an enraged Jayselan attacked the pregnant woman with a knife with a 10cm blade on 30 Dec 2017.

According to the Deputy Public Prosecutor, Jayselan and Mayuri have been married for about five years, since 2013. Relations between the couple, who have a four-year-old daughter, went south in October last year due to frequent arguments over their child and their financial situation.

It was at this time that Mayuri told her husband that she was pregnant. Jayselan refused to believe that the child was his and accused his wife of cheating on him, driving his wife to run away from home.

Unable to cope with her husband’s aggression, 27-year-old Mayuri sought refuge with her friends, may of whom are sex workers, at their rented rooms in Lorong 16 Geylang.

On the fateful day of the attack, Mayuri spotted an old friend while she was buying her breakfast and began to chat with him. Jayselan bumped into the pair and confronted them, suspecting the man of being his wife’s pimp.

While the man walked away, Jayselan accused his wife of going back to the sex trade. Before his wife could respond, Jayselan punched and kicked her. After stabbing his wife with the knife, Jayselan fled the scene but the police caught him later that day.

Mayuri and her unborn child survived the attack. Doctors at Tan Tock Seng Hospital treated the pregnant woman for the injuries she sustained in the incident.

Despite the horrific attack, Mayuri has reportedly forgiven her husband and the pair remain married. Citing this, Jayselan’s defence lawyer pleaded for a shorter jail term of 5 – 5.5 years.

The judge, however, sentenced the cleaner to seven years in jail after he pleaded guilty to one count of causing grievous hurt to his wife with a weapon and one count of failing to provide his urine sample after he was caught for suspected drug-related offences.Follow us on Social Media