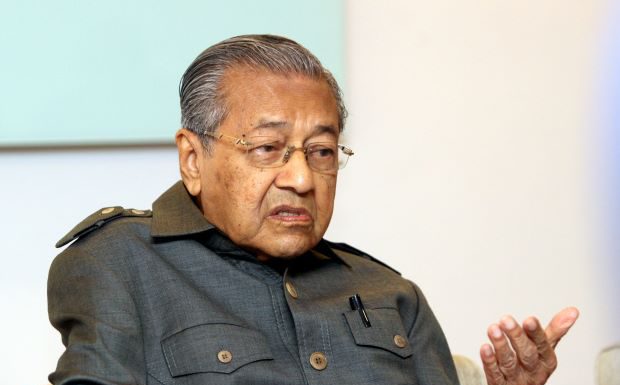 Is there any politician who's not investigated in Malaysia?

Malaysia’s beleaguered Prime Minister, Tun Najib Razak may be sensing something of a benediction if reports disparaging his former boss and former Prime Minister by America’s Central Intelligence Agency (CIA), is anything to keep the old geeser wide awake.

News reports in various Malaysian papers have claimed the Mahathir administration was involved in the Bumiputera Malaysia Finance Limited (BMF) scandal causing his country to bleed to the tune of billions in the 1980s. The CIA’s untimely declassification of once sensitive material is now certain to swing the political pendulum in the polarised nation that have seen legions of followers of both side of the political divide taking to the streets in recent months and years.

The premier security agency said that Tun Dr Mahathir Mohamad’s position as prime minister then was at risk due to the graft scandal as opined by the Malay Mail and the reputation of the government-owned Bank Bumiputera (Bank Bumi) reputation was marred by the “questionable” operations of the BMF, its wholly-owned Hong Kong subsidiary.

“Circumstantial evidence suggests that the scandal extends into the Mahathir administration. As a government-owned bank, Bank Bumi is closely monitored by both the Finance Ministry and Central Bank and no important decisions are made without their agreement of knowledge,” the nine-page report titled “The Bank Bumiputera Scandal: More Trouble Ahead for Malaysia’s Mahathir?”

“It is unlikely that the government was unaware of Bank Bumi’s increase on lending limits for its overseas branches to allow more funds to be channelled to Hong Kong,” the CIA report added. Bank Bumi and its offshore subsidiary BMF issued billions in bad loans to numerous Hong Kong property speculators, including the Carrian Investment Limited (Carrian Group) between 1979 and 1983.

But the CIA did add a caveat. It said that it found no direct connections between Dr Mahathir and the banking scandal, his administration was tainted by the “hint of association”.

“The secrecy of the government’s investigation — defended as necessary under Malaysia’s Banking Secrecy Laws — and a year’s delay after the problems surfaced in effecting any management changes at BMF have made the government suspect.

“Many businessmen and bankers believe that the government is using [some] accused BMF officials as scapegoats in an effort to avoid implicating senior government officials,” the report added.

Malaysia’s longest-serving Prime Minister has been a vocal critic of the West and its dealings with Asia. In 1981 he caused a stir when he asked his countrymen to boycott British goods because of London’s decision to raise school fees for Malaysian students.

In 1998 at the height of Asian financial crisis he slammed Jews as people out to rule the world and wreck Muslim nations through the aid of proxies. Mahathir offered no proof of his claims and despite the U.S. of Representatives passing a resolution urging him to step down, Mahathir the warrior dug in and snubbed Washington.

The CIA which is regarded sometimes with disdain is well-known for bungling operations from Cuba, to Iraq to Vietnam. In 1961, a CIA intelligence officer had tried to bribe a Singapore intelligence officer to feed information to the agency but he was quickly apprehended.