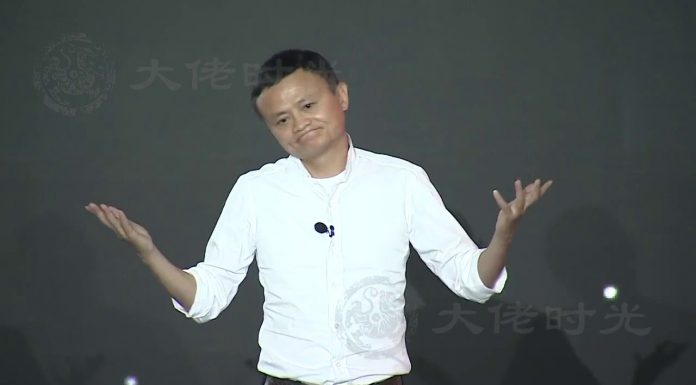 The man who started Alibaba in his one-room apartment with 17 friends in 1999, had always believed that his competition is not China, but in America’s Silicon Valley. A video clip from a 2012 documentary, “Crocodile in the Yangtze: The Alibaba Story”, which is now going viral on social media, shows a young Ma trying to convince his friends to join his start-up.

The documentary was directed and produced by an Porter Erisman. Erisman’s film follows Ma’s life as he battles US giant’s like eBay to building one of the most successful companies in recent history. Erisman worked at Alibaba as Vice President for eight years.

The company’s name came from the character Ali Baba from the Arabian literature One Thousand and One Nights because of its universal appeal. As Jack Ma, one of the founders, explained:

“One day I was in San Francisco in a coffee shop, and I was thinking Alibaba is a good name. And then a waitress came, and I said, “Do you know about Alibaba?” And she said yes. I said, “What do you know about?”, and she said, “Open Sesame”.

“And I said, “Yes, this is the name!” Then I went on to the street and found 30 people and asked them, “Do you know Alibaba?” People from India, people from Germany, people from Tokyo and China … they all knew about Alibaba. Alibaba – open sesame.

“Alibaba is a kind, smart business person, and he helped the village. So … easy to spell, and globally known. Alibaba opens sesame for small- to medium-sized companies. We also registered the name “Alimama”, in case someone wants to marry us!”

Ma promised the US President Donald Trump in January last year that he will create 1 million jobs in the United States of America. Today, citing the ongoing trade conflict between China and the US as a reason, Ma said that he is retracting his promise to Trump.

Ma told Chinese state-run news outlet Xinhua today that his promise was based on the assumption that the US and China would have “rational trade relations,” which is no longer the case. “This promise was based on friendly US-China partnership and rational trade relations,” Ma said. “The current situation has already ruined that. There is no way to complete the promise now, but we won’t stop working hard to promote the healthy development of China-US trade.”

Jack Ma earlier said that the trade war between America and China will last for about 20 years, as it is a competition for supremacy by two mega-countries. He said the Americans and the Chinese have different views of conducting business – the Americans believe that completion is good for business, while the Chinese believe that harmony is better. So, it is a clash of two cultural views, explained Ma. He said the trade war will likely continue even after Trump’s presidency.