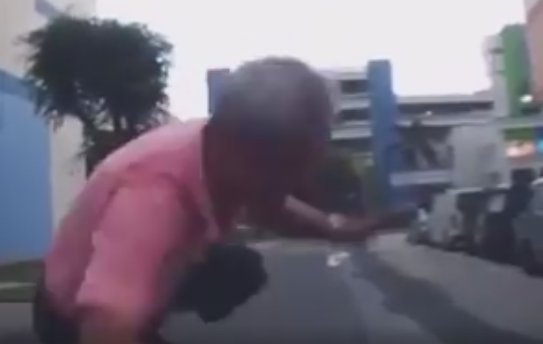 According to the Facebook group road.sg an incident strikingly similar to the “please-hit-me” car scams elsewhere in the world, happened in an industrial estate in Tampines a few days ago.
A driver’s car dashboard video captures of an old man slamming himself onto the bonnet of the car as he was turning the bend in the industrial estate. The traffic seemed to be not heavy at that time.

It is unclear what the elderly man was trying to do but it bears resemblance to insurance scams elsewhere in the world where the scammer fake injury by hauling himself onto the car. The scammer then demand compensation for the fake injuries from the car driver or the driver’s insurance company.
The case looked strikingly similar to another incident which happened in April last year, where an elderly man slams himself into a car in Ang Mo Kio.
A man by the name of Ray Tan notified the Singapore police about the case in Ang Mo Kio last year, to which they replied:

“Hi Ray, thank you for bringing this to our attention. Police would like to request for the person who had witnessed the incident to come forward to lodge a police report at any Neighbourhood Police Centre/Post to provide more information so that we can look into the matter.”

Road.sg believes that this incident should convince you to install a car dashboard camera. Dashcams can be useful in capturing such fake accidents and be helpful to avoid the hassle of proving your innocence.Follow us on Social Media