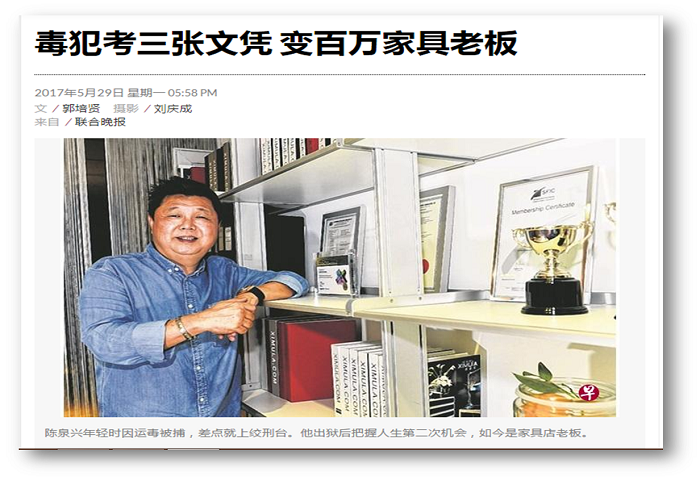 Chen Quanxing was 26-years old when he came face to face with the prospect of death.

He had been caught for trafficking in heroin, was found guilty and thought that he had met his end. Under Singapore’s laws, trafficking more than 15g of heroin mandates the death penalty.

But as luck would have it, by a turn of events, Chen escaped the ultimate punishment and was instead sentenced to 20 years in jail.

Those were dark days indeed, as Chen, now 55, recounts.

“I was 26 years old then,” he told Lianhe Zaobao. “It was my first offence at trafficking drugs and I was caught immediately. I thought to myself then that it was all over. I was going to die for sure.”

But having been given a second chance, he embarked on renewal and studied hard and became the owner of a multi-million dollar furniture business.

This is a far cry from his younger days when he was a gang member.

“I was causing trouble all day long,” he said. “Fighting, drinking, gambling and even taking drugs. I earned a lot of money through the vices, but ultimately, I still owed loansharks a huge debt. I had to smuggle drugs just to pay them back.”

He was 40 when he was released from prison.

“I lost so much time just like that, and caused my family a lot of grief,” Chen said. “I decided to make something of myself after I came out of prison, and studied hard. I got my O-Level, A-Level, and an enterprise management professional certificate.”

He then joined a friend’s furniture company and slowly worked his way up to a director on the company’s board management.

“It has not been easy all these years,” he says. “I want to thank my family and friends for not giving up on me, and always helping me.”

He is now involved in initiatives which help ex-convicts and he also serves as a counsellor in halfway houses and prisons.Follow us on Social Media