Cash-strapped PHV driver who killed pedestrian in accident asks for advice online, only to be flamed by netizens 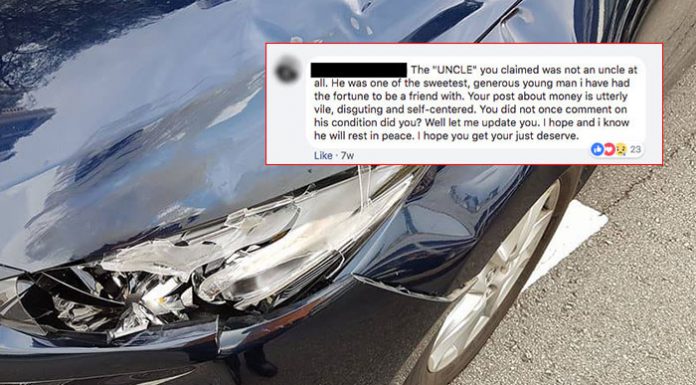 A local private hire vehicle (PHV) driver who killed a Filipino pedestrian in a road accident this January has drawn intense flak online after he appealed for advise on how to pay off the damages to his rental car.

The fatal accident had occurred in front of a carpark at Block 104A Henderson Crescent along Tiong Bahru Road on 27 Jan around 4.45pm. According to the Chinese daily, the victim – a 42-year-old accountant – fell to the ground after the PHV driver’s car hit him and sustained a head injury and began bleeding. He was reportedly conveyed to the hospital in a comatose state and passe away shortly thereafter.

Both the Singapore Civil Defense Force (SCDF) and the Singapore Police Force (SPF) confirmed the accident to reporters. Police investigations are ongoing.

The PHV driver, Facebook user Soh Fernando, took to Facebook mere days after the accident and appealed for advice, adding that the victim had “dashed out of nowhere” leading to the accident.

Revealing that his vehicle’s windscreen was smashed during the collision and that the impact caused dents to his vehicle’s bonnet and front bumper, Soh added that the vehicle was a rental car and that the rental company is demanding $4,300 in reparation fees for damages to the car.

Soh, who is unable to retrieve the car since it is presently under the custody of the Traffic Police, is still being charged daily rental fees. He is also unable to rent another vehicle to make ends meet as a PHV driver, until he pays the reparation fees.

Revealing that he is strapped for cash and that he cannot afford to pay the fees, Soh asked for advice on his situation.

Instead of receiving advice, Soh was flamed online with many of the victim’s friends and family members responding to his post and accusing Soh of being “self-centred” and “vile”. Netizens accused Soh of only being concerned about the damages to the car and not the victim who died and called him out for his insensitivity online: