Car reverses into childcare centre in Hougang – no one injured 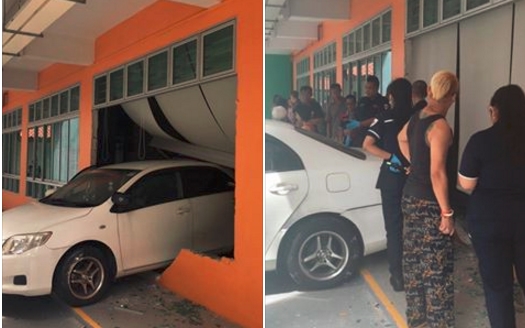 A white sedan reversed into a childcare centre in Hougang earlier this afternoon (22 Jan). Several Facebook users shared pictures and videos of the accident, which showed that the affected childcare centre is one of NTUC First Campus’ My First Skool.

They expressed shock at the accident and said that it was fortunate that there were no students in the childcare centre when the incident happened.

NTUC First Campus confirmed that the centre was empty at the time of the accident and that parents of the affected centre were notified of the incident.

Children affected by the accident would be temporarily served at another branch located in Rivervale Crescent. Repairs to the damaged childcare centre are expected to take three to four weeks to complete. Police are investigating the accident.

This is the second incident within a week in which a driver had accidentally reversed into a public space.  A Citycab taxi got stuck between two pillars of a HDB void deck on Jan 19. No one was injured in that accident as well.