The orphanage boom in Cambodia matches the rise in tourism in that country . 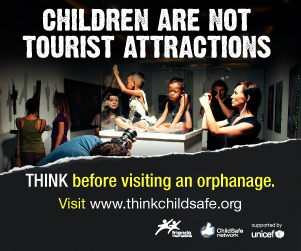 By: Roshni Kapur
When one walks into an orphanage in Cambodia, he will be shocked to find out the orphanage is not a real orphanage, and the orphans are not real orphans. Known as ‘orphanage tourism’, the orphanages are increasingly used to serve the tourism industry. It is no coincidence that the surge in orphanages matches the tourism boom, where 4.5 million tourists visited Cambodia in 2014- up from 4.2 million in 2013.
It is estimated that 75% of the children in orphanages are not actual orphans; they usually have one or both biological parents. Cambodia continues to remain one of the poorest countries in the world after decades of war, genocide and corruption. In 2009, approximately 22.9% of Cambodians lived below the national poverty line.
Poverty and the lack of government safety net has led to grim consequences for many families that are unable to provide the food, clothing and care for their children. They end up sending their children to orphanages in hopes that they will be cared for and given access to proper education.
New orphanages are springing up in the country. Based on data provided by the United Nations children’s agency (UNICEF), the number of registered orphanages increased to 269 between 2005 and 2010, housing almost 12,000 children.
The orphanages are centered mostly in Siem Reap, which has been called the hub of “orphanage tourism” in Cambodia. Orphanage tourism is widespread in other parts of Southeast Asia too, such as northern Thailand and is now on a rise in Myanmar as tourist numbers surge.
Many of these orphanages have turned into dubious and profit-making institutions. In order to generate profits, orphans perform the Khmer dances on board cruise ships for tourists. An online article on Channel NewsAsia stated that the children are made to rehearse daily before performing for tourists on board cruise ships that are docked at Phnom Penh. In extreme cases, the orphans have to solicit donations from visiting tourists.
The business of orphanage tourism has sparked concerns about child exploitation, abuse and financial dishonesty. Action Pour Les Enfants (Action For The Children), a non-profit organisation has reported an increase in child abuse cases.
Love in Action, an Australian-run orphanage, was shut down based on allegations that the children were being abused and beaten up. A government spokesman was quoted in CNN that the orphanage “did not meet requirements” and was not registered. The orphanage was run by a foreign woman, and operated through the use of donations.
Most of the orphanages in Cambodia are run and financed by private individuals or faith-based organisations. Foreigners can easily set up an orphanages without fulfilling the registration criteria. Moreover, the amount of money the orphanages receive is uncertain since they do not disclose their financial statements.
“It’s hard to gauge because many orphanages are not transparent about their accounts, but it’s a pretty safe guess that it’s a multimillion dollar business,” James Sutherland, communications coordinator at Friends International, a social enterprise, was quoted in an online article on Thomas Reuters Foundation.
The Cambodian government has come under fire by a consortium of civil society groups and NGOs for failing to protect vulnerable children. In response, the government established a licensing system that required all orphanages to register and fulfil a list of terms and conditions.
In 2013, they tightened the regulations and protocols by introducing more paperwork for orphanages. Despite government efforts on policies to impose minimum standards for child protection, enforcement issues around registration are a prime concern.
UNICEF’s Cambodia country representative, Rana Flowers, said that the lack of registration and of enforcement of minimum standards places the orphans at great risk of neglect and abuse.
“I consider this to be a humanitarian emergency,” Flowers commented further. “This is a growing industry with little regulation, so anyone can open an orphanage to the detriment of thousands of children.”
Child protection and NGO workers have initiated projects and campaigns to put a stop to orphanage tourism. They have asserted that these orphanages should be an ‘absolute last resort’. They have also urged tourists and volunteers to boycott, claiming that their presence causes harm to orphans and enables exploitation.
One prominent non-profit group that campaigns regularly against the practice is Friends International. “Long-term residential care belongs to a state of mind that all the research and progressive practice and best practice and the UN has abandoned a long time ago,” said Luke Gracie, alternative care manager, Friends International.
The true extent of the orphanage crisis may finally paint a clearer picture when the Ministry of Social Affairs and aid groups publish a long-awaited survey. “The number is likely to be closer to 600, which shows that this problem is out of control,” an aid source, who requested anonymity, told the Thomson Reuters Foundation.
The Cambodian government plans to stop new orphanages from opening and have promised annual inspections of existing orphanages. They inspected 228 residential care units last year, housing a total of 11,014 children. Since 2011, the government has shut down 11 orphanages after not meeting minimum care standards.
Although poverty rates have decreased in recent years, the inequality gap between the rich and very poor is widening. The lack of a social welfare network to support impoverished families is deeply entrenched in the Cambodian society.
Poverty and abandonment have not only led to an increase in the population of orphans, but also have left many deeply scarred. Despite the government’s efforts to contain the industry, they are struggling to stop more orphanages from opening.
—
Roshni Kapur is a marketing and communications executive and blogs at http://roshnik.blog.com.