The Independent Singapore News
Home News Featured News Calvin Cheng weighs in on who should be the next PM; netizens...

Calvin Cheng weighs in on who should be the next PM; netizens say Tharman

He then explained the difference between the two. For the PAP, he said, “The era of colourless but competent technocrats sailing through elections unchallenged must surely be over. Candidates have to win elections and for better or for worse, we only need to look at other developed countries to see what sort of leader wins elections: charismatic, eloquent, and able to connect with the people”.

He continued, listing the qualities in a leader he thought would be the best for the people.

“The technocratic and steady leadership that has served us well for the last half-century would continue to serve us well. One doesn’t need to be able to take good selfies, or wear colourful costumes, or have a telegenic smile to be able to formulate the best policies to see us through the next decade. But one needs the respect and support of his peers and the civil service to be able to execute these policies well”.

Cheng explained that the conundrum now faced was deciding if Singapore needed a politician or a technocrat more – since he said it was rare that both qualities existed in the same person.

He concluded his post saying, “This is the conundrum the 4G now faces. We all hope they will choose wisely”.

While Cheng got rather didactic and did not take a stance in the question he was asked, many commented that Deputy Prime Minister and Coordinating Minister for Economic and Social Policies Tharman Shanmugaratnam was a top favourite. 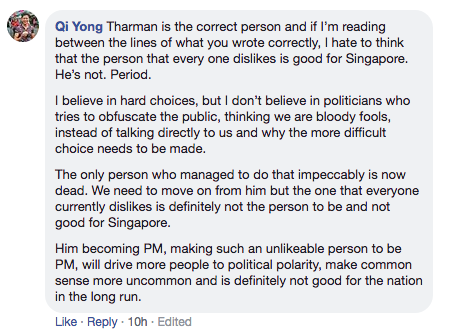