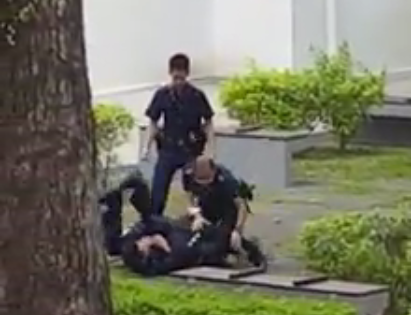 A video showing three police officers trying to restrain an uncontrollable suspect has been circulating online. In the almost 2-minute clip, the police officers can be seen thrashing around as the suspect pushes them to the ground as they unsuccessfully try to control him when bystanders nearby come to their aid.

One policeman who was pushed to the ground appears to have sustained some injury to the head. He can be seen walking in a dizzy manner while being helped by a passerby.

Netizens who have responded to the video wonder why the policemen did not use their batons or tasers against an aggressive suspect who was resisting arrest.Follow us on Social Media