BTS well-loved by fans for their vocals, dance and relevant lyrics as well as humility. 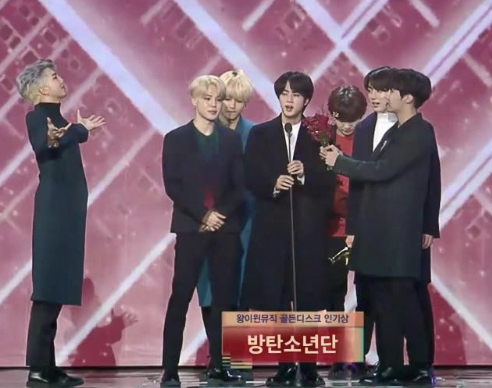 Sensational K-pop band BTS has rocked the world with yet another impressive album, this time topping  the UK album chart.

Their new single, titled “Boy With Luv”, was released on Friday.

Within 24 hours of its release, the single became YouTube’s most-streamed video, garnering 74.6 million views. It was also the fastest video to hit 100 million views, setting a record of two days.

Formed in 2013 by Big Hit Entertainment, BTS has been steadily gaining popularity in the Asian region, through their youthful and strikingly good looks, as well as strong and charismatic dance movements.

However, it was only in the past three years that they started to gain international recognition. According to CNN, one reason why the BTS is so popular is because their music focuses on themes like vulnerability and self-love which are essential topics in issues like mental health.

Quoted from CNN, “One popular theory is that their music tends to be particularly introspective, emotional, empowering and hyper-aware of the machinations of perfection and conformity that often drive the K-pop industry. Even their 2014 debut single, “No More Dream,” was an anthem against conformity:

What is you that you dreamed of? Who do you see in your mirror, I gotta say: Go your own way.
One of their most recent singles, “Idol,” celebrates individuality and confidence:
I know what I am, I know what I want, I’m never going to change … You can’t stop me from loving myself.”

Besides focusing on socially relevant topics like mental health, BTS was the first South Korean group to speak at the United Nations in September 2018, where they delivered a three-minute speech during the launch ceremony of UNICEF’s global partnership Generation Unlimited.

The speech revolved around their “Love Myself” campaign, which was launched in partnership with UNICEF. It focuses on global education and the prevention of youth violence.

Yet, in spite of the widespread popularity and attention, the humble group has never let the success go to their heads.

Speaking in Korean at a press conference in Seoul, the group’s leader Kim Nam-joon (the only member to speak fluent English) said ,”We should never think that we are conquering the world.”
He added, “Of course we’re enjoying it and rejoicing, but we’re also staying grounded.”
Being well-loved by fans for their wonderful and skilled vocals, and dance is one thing. But, being compared to the Beatles is a whole new level for Kim who commented that he was humbled by comparisons between Beatlemania and BTS’s fans, who are known as the ARMY.

In 2018, it was also believed that some 800,000 tourists chose South Korea as their destination due to BTS. The number is more than seven percent of the total visitors to the country.

The band will play two sold out nights at London’s iconic Wembley Stadium, on Jun 1 and 2. /TISG