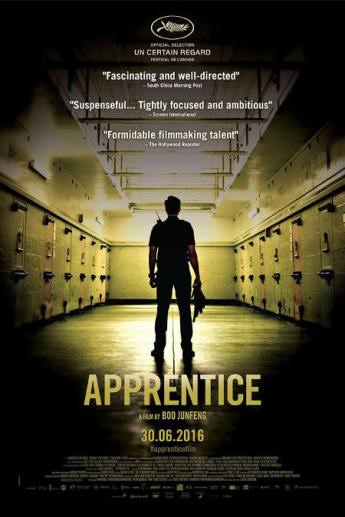 In a rickety, rather rundown movie house called ‘The Projector’ at Golden Mile Towers, I had a refreshing breath-taking glimpse of a Made-in-Singapore movie: Apprentice.

What a talking point as the 96-minute movie, a genius undertaking by 32-year-old homegrown film-maker Boo Junfeng, which was deservedly picked as Singapore’s entry to the Academy Awards in the Best Foreign Language Film category.

Wow, this is a rope-a-dope treat to watch as it tackles head-on the subjective issues on the death penalty and little wonder, the film made its world premiere at the prestigious Cannes Film Festival in May in the Un Certain Regard section.

I was invited by Natahar Bava and Dr Rose Bava to catch ‘Apprentice’ on Sunday, in commemoration of the 14th World Day Against the Death Penalty. The event was organised by We Believe in Second Chances and Singapore Anti-Death Penalty Campaign (SADPC).

‘Apprentice’ is a MUST WATCH.

It has a shocking and stirring twist, an endearing story of a young man who ended up learning the executioner’s trade from the man who opened the trapdoor on his own father. I was tremendously moved by the intensity of the almost father-son relationship that develops between the young prison guard and the hangman.

Yes, the death penalty is an unending fiery political issue in Singapore and in neighbouring Indonesia, particularly when foreigners have fallen foul of strict anti-drug laws. Critics sometimes say in Asean, it has been disproportionately applied to the poor, while well-connected criminals and wealthy foreigners escaped the noose.

Credit to Boo, who shot the prison scenes in disused prisons in Australia to avoid controversy in Singapore, where, credit to the government, an estimated 95 per cent of the population still support the death penalty.

Hats off to ‘Apprentice’ as it captures the classic crutches of what does NOT often define a Singapore movie, in keeping with a power stronghold on resonating with both a local and international audience. It concentrates on its narrative core and scrutinising capital punishment and the local justice system, as well as fluctuating perspectives of morality, ethics and basic human values.

What a rousing Causeway cast from veteran Malaysian actor Wan Hanafi Su, in an absolutely riveting in the role of chief executioner Rahim.

Hey, this is a value-add Made-in-Singapore movie you must somehow catch, hook or crook, as it’s a rarity to find a local film that is so willing to confront the controversial and fraught subject of the way crime and punishment is handled with this much finesse.

As a crime-beat journalist, over two decades at The Straits Times and The New Paper, I keep wondering if the death penalty is ever justifiable as a societal response to heinous crimes?

Indeed, how often do we ever ponder the effects of capital punishment on those who impose it, those who witness it and those with families who indirectly bear the consequences of it?

How can it be imposed fairly, I ever wonder, deep in my heart? But Boo’s endearing and thought-provoking film offers different viewpoints without resorting to preaching, and credit to him, his uncompromising approach in refusing to judge any of its characters, be it the damned or condemned.

Down to the hangman’s rope, ‘Apprentice’ is a MUST SEE and a realistically refreshing alternative.

If you want to experience a very strong Singaporean feel, Boo’s move will open your minds, if not break your hearts.