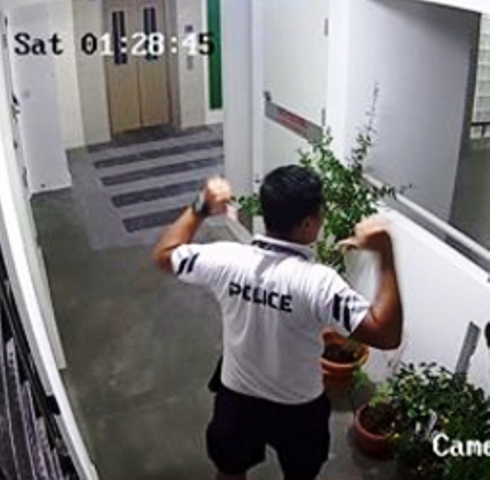 A relic of World War II, a 105mm British projectile, was found at a construction site near Fernvale Lea in the Sengkang West vicinity on Friday night (22 Jan) and was safely detonated by the Singapore Armed Forces yesterday.
On Friday night, a group of 40 Police Officers from Ang Mo Kio Division, including 25 Sengkang NPC officers assisted to effect a large security cordon and conduct house visits to advise residents in Fernvale Lea to stay indoors and not be alarmed if they heard a loud sound.

#itsbeenablastWAR RELIC FOUND AND DEFUSED NEAR FERNVALE LEALast night, a war relic was found at the construction…

One resident there however, did not believe it was actually the police who was knocking on his door and said that he will be “reporting this to the police”.
In the resident’s Facebook post, where he posted several pictures from the CCTV outside his home and explained why he refused to open the door to the policeman, the police officer can be clearly seen trying hard to establish his identity.

Another resident of Fernvale Lea too expressed surprise that the policeman came alone and took the flight of stairs instead of taking the lift.

Some others who responded to the Facebook post said that the man in the pictures looks like a real policeman, and asked what if he had come to warn them of an emergency situation.
Another clarified that it was actually the police who had arrived in a group of 8, to inform the residents there that a bomb had been found nearby, and to advise them not to be alarmed.

After much clarifications from others in the neighbourhood, the resident who had posted the screengrabs of the CCTV finally admitted that it was actually the police, but said that he still would not open the door to anyone who comes in the middle of the night.