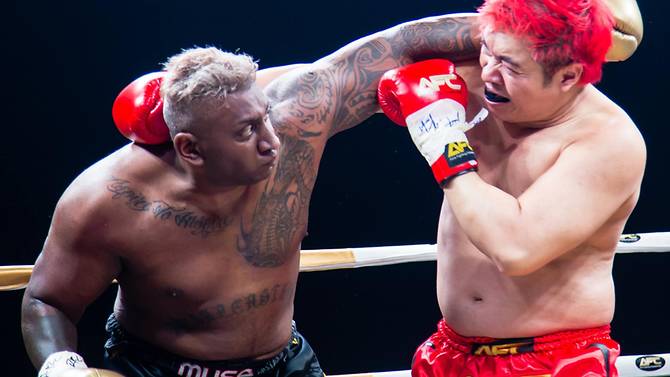 Lim, 47, was initially supposed to square off with Singapore Idol alum Sylvester Sim who was forced to suddenly withdraw from the match a day before the match, on Friday, due to insurance issues. Subramanian – the president of World Bodybuilding & Physique Sports Federation (WBPF) – stepped up to the plate at the last minute, taking Sim’s place in the celebrity smackdown which was billed as the ‘Fight of the Century.’

The match started off well enough, with Pradip seeming to have the upper hand in the first round, according to an eyewitness interviewed by local reporters. However, things began to take a tragic turn when a few hard punches by Lim in the second round resulted in Subramanian getting a nosebleed.

The eyewitness – a backstage staff member who declined to be named – recounted:

“When the referee saw that there was a nosebleed, he called off the fight and consulted with some other officials. He then declared Steven Lim as the winner of the bout.

“Straightaway after the fight, Pradip (was) concussed and was helped to the backstage area. When I was at backstage with Steven Lim, I already saw (Pradip) lying on the stretcher and a few medics were fanning him.

“Initially I thought it was just a concussion … plus there was no sign of a heart attack. He was then sent to hospital via the ambulance. It was much later that I heard the news that he died.”

Subramanian lost his life at Singapore General Hospital at 9pm – an hour after he stepped into the ring at Marina Bay Sands with Lim.

Subramanian’s family shared details of the wake that is held today at Woodlands Street 81 on Facebook, writing: “Our beloved son passed away suddenly.”

Meanwhile, the organisers of the Asia Fighting Championship said that they are working with hospital staff to determine the cause of Subramanian’s untimely passing:

“We are in close contact with the medical staff at the hospital to ascertain the cause of death and request that during this difficult time we should come together and extend our support to Mr Subramanian’s family, friends and associates and refrain from any speculation.”

Lim who won the match by technical knockout initially shared on his Facebook page, “Pradip was rushed to the hospital no joke by ambulance!”

When he received news of Subramanian’s passing, Lim paid tribute to him on Facebook, writing: “Rest in Peace, my really truly respected fearless warrior and fighter.”

Lim, known to many locals as an online oddball, rose to fame after a failed Singapore Idol audition that went viral thanks to his humorous antics:

In the wake of this tragic match, several netizens bashed Lim online for his role in Subramanian’s passing while still others stood up for him:

Ok the passing is unfortunate. But people need to stop shooting and calling Steven Lim a murderer. I'm not some fan boy…