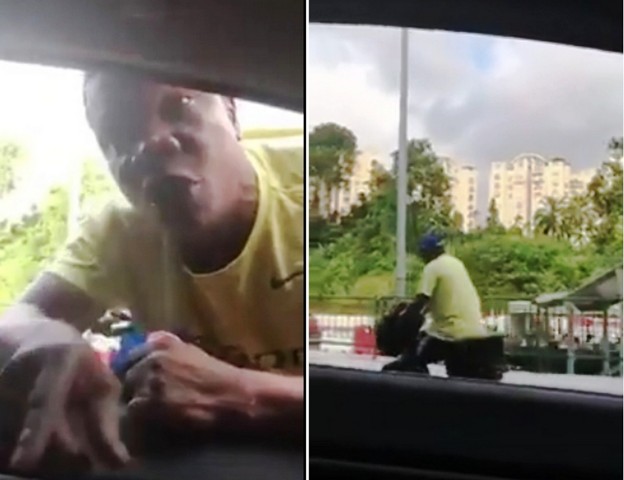 Facebook user Ian Moo shared a video of him being harassed by a black man to the online publication All Singapore Stuff. Ian commented about the incident in his Facebook too and said: “If you think you had a wild morning, try mine.”

According to Ian, the incident happened when he was driving along Bukit Timah Road, when the black man (who Ian claims is a foreigner), accused him of trying to run him down. Ian said that the man was who was riding a motorised bicycle at the shoulder of the road, suddenly cut out to the middle of the lane. Ian sounded the horn to alert him when the fracas happened.

Ian said that the black man became angry with him for honking and followed Ian’s car until it came to a stop at Rail Mall in front of the Toast Box at Upper Bukit Timah Road. There the man grabbed Ian by his collar. That was when Ian started videoing the incident and also called the police.

In the video the man can be heard saying that he is a CIA agent and can seize Ian’s phone. He also threatened Ian saying, “the next time I catch up with you see what I am going to do to you.” Ian can be heard pleading with the man in a firm voice, “sir, please get off my car.”

Ian said that the police is looking for the black person.
[fvplayer src=”http://youtube.com/watch?v=H1IrC1I0szs”]Follow us on Social Media