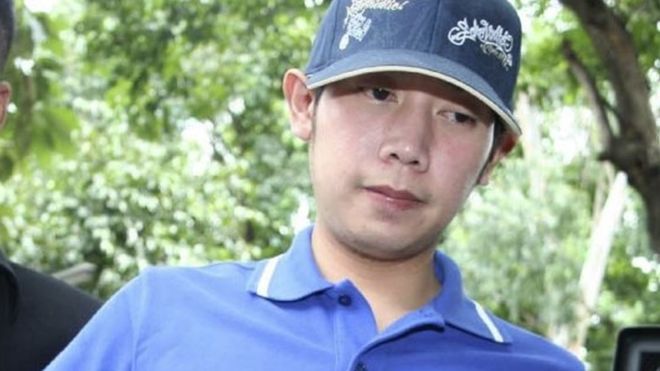 The Thai heir to the Red Bull empire, Vorayuth Yoovidhaya, is reported to have fled to Singapore, just two days before a warrant of arrest was to be served on him.

Thai authorities say that the scion, who was believed to have been in the UK, entered Thailand on April 23 and departed for Singapore 2 days later.

Mr Vorayuth has been ignoring orders to show up to face charges over the death of a police officer in 2012.

Mr Vorayuth’s Ferrari had allegedly slammed into the motorcycle policeman, Wichian Klinprasert, dragged him along the road and then sped away from the mangled body.

A trail of brake fluid led investigators to the gated estate of one of Thailand’s richest families, and to Mr Vorayuth.

Since then, however, whenever he was called up to face the charges, he has delayed or ignored the orders, claiming various reasons, such as he was sick or was out of the country for business.

Following news that he has fled to Singapore on his private jet, Thai police now say it has contacted Interpol to help look for the 32-year old billionaire.

According to the BBC, Singaporean police and aviation authorities did not immediately respond to the BBC’s request for comment.

“The Associated Press news agency said Singapore airport authorities had confirmed with them that Mr Vorayuth’s private plane was in the country as of Tuesday,” the BBC said.

“A representative at Seletar Airport, which receives private aeroplanes, told the BBC that they were “unable to release any information” and declined to give a reason.”

While Singapore and Thailand do not have an extradition agreement, they have frequently cooperated in transnational cases.

The fact that Mr Vorayuth is yet to be arrested, 5 years after the incident, has attracted criticism that the elite class there enjoy special treatment from the authorities.Follow us on Social Media