Big, burly, Caucasian man assaults cabbies after refusing to pay fare but gets detained by gang of taxi drivers who worked together to bring him down 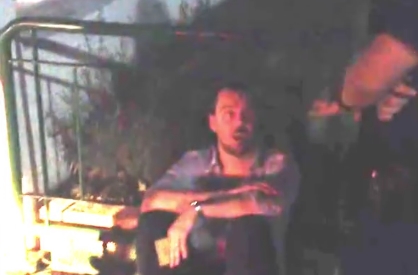 Cabbies from different taxi companies came together to bring down a customer who not only did not pay the fare, but also assaulted two taxi drivers. The Chinese Daily which reported the incident said that the cabbie, Mr Wong picked up the man at 313 Somerset at about 5am on 26 April. The customer, a Caucasian did not want to specify his destination but said, “just drive, I want to sleep”.

Despite repeated questions as to his destination, the customer ignored the cabbie. The cabbie got frustrated when he was at the Singapore Art Museum and asked him to get off. Wong said: “I can’t just anyhow drive him somewhere so I asked him to get off the taxi. He got off but didn’t pay me my taxi fare.”

When Wong demanded for the taxi fare, the big, burly Caucasian turned around and punched him before walking into Hotel Royal@Queens. When he tried to get into the lift, Wong confronted him again. The hotel’s manager intervened at this juncture and asked the Caucasian to leave the hotel as he as not a guest there.

When he got out, Wong spotted two other cabbies and asked them for help. One SMRT taxi driver came forward to help him, while the other agreed to drive closely behind. After walking a distance, the aggressive customer turned around and punched both cabbies who were following him. He then continued trying to walk away. Wong said: “The ang moh was big and tall. I and the other Malay SMRT taxi driver couldn’t stop him so we just followed him.”

Wong sought the help of two other taxi drivers as he was trailing the aggressive man. In the end, a gang of eight taxi drivers – two on foot and 6 in their taxis – surrounded the Caucasian and subdued him along Crawford Street. They then called the Police.

Posted by Fabrications About The PAP on Tuesday, 25 April 2017

Police say a 33-year-old Caucasian was arrested in relation to the incident and investigations are in progress.Follow us on Social Media