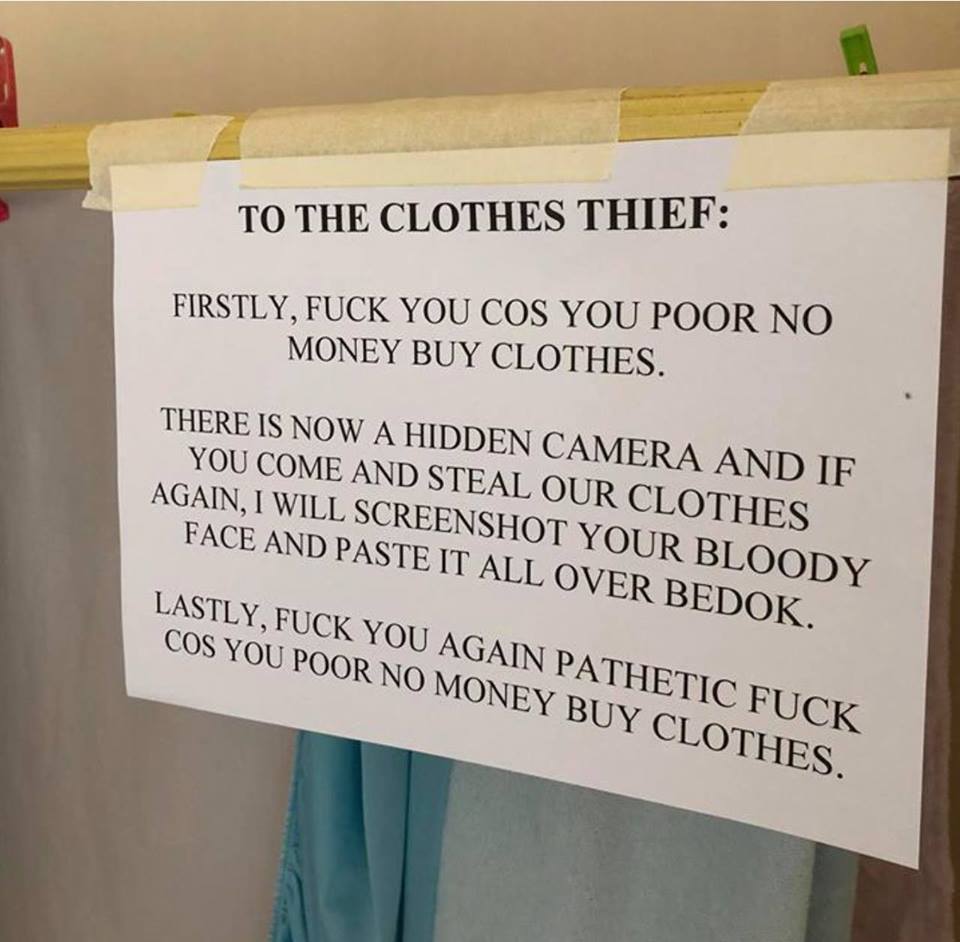 A Bedok resident’s angry notice warning an alleged clothes thief to refrain from stealing his clothes or risk further action is trending on social media.

In the expletive-laden notice, appended to his clothes rack that is sitting in the common corridor of a HDB block, the resident warns the clothes thief that he has installed a security camera outside his flat and that he will expose the thief’s identity by pasting photos of the thief’s face all over Bedok if he strikes again.

The angry resident wrote also slammed the thief for being poor and having no money to buy his own clothes:

The resident’s notice has garnered over 500 reactions and over 300 shares on social media so far.

It is, however, unclear whether the resident went through the proper channels before installing the hidden security camera, that he claims to have affixed outside his flat.

According to current regulations, flatowners have to first make a police report and get written permission from their town council before they can temporarily install surveillance equipment outside their home. Such cameras have to be taken down after a period of six months.

Offenders who misuse surveillance cameras and install such devices without proper permission, or those who exceed the permitted time period they are allowed to install the camera, can face hefty fines.

Further, the angry Bedok resident warns that he will expose the the thief’s identity by pasting photos of the thief’s face all over Bedok if he strikes again.

According to current regulations under the Building Control Act, it is unlawful to paste posters or advertisements on local buildings, such as buildings within HDB estates, without a license.

To display such posters, one has to obtain explicit permission from the Building and Construction Authority (BCA).  Those who display such posters ot advertisement without a license will have their material removed and may face a fine of up to $5000.Follow us on Social Media