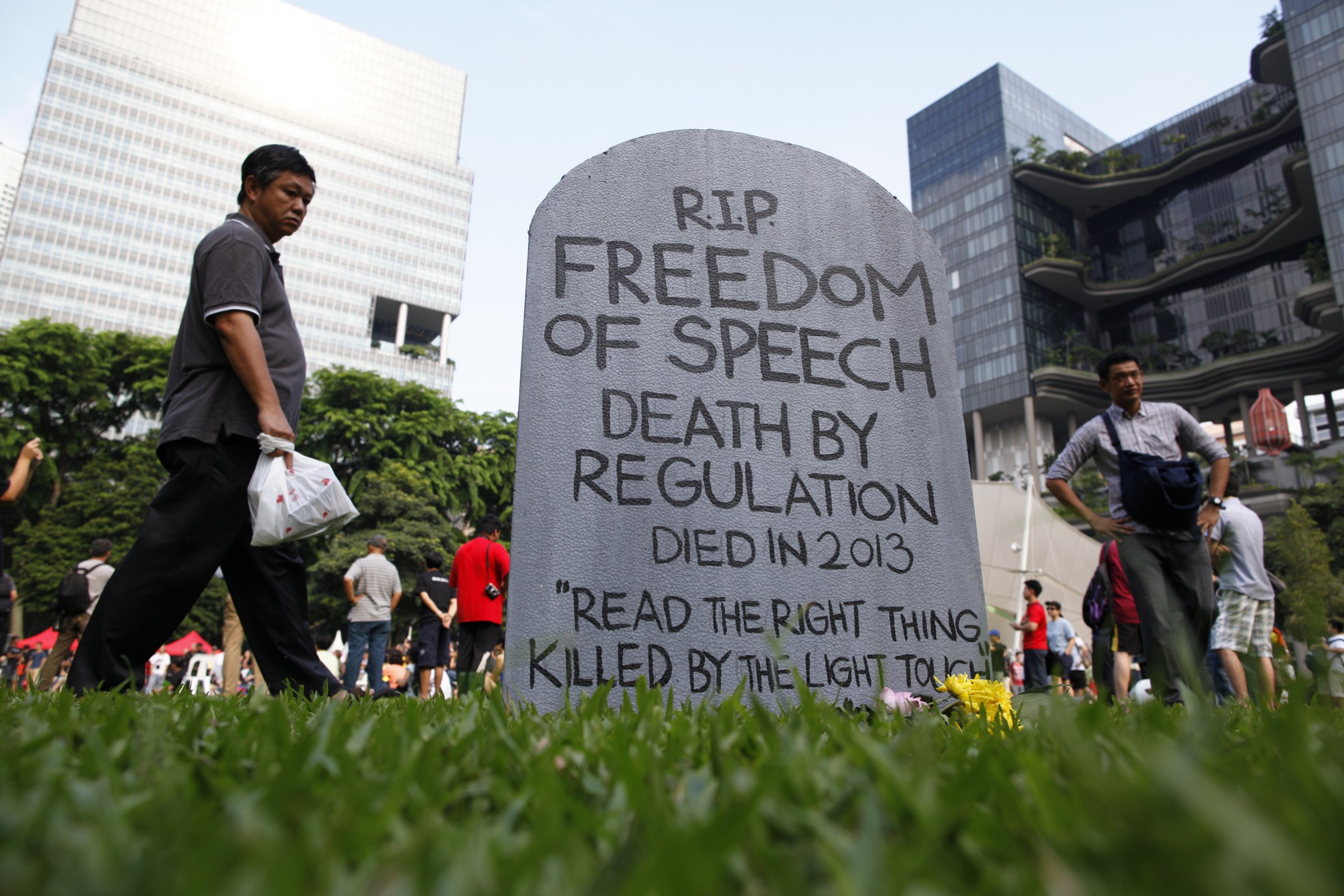 “We as a society should be forward-looking.” – Lee Hsien Loong, 2004, National Day Rally speech.

13 years after Prime Minister Lee Hsien Loong made those remarks in his maiden National Day Rally speech, the barricades will be up at Speakers’ Corner come 1 July.

It is perhaps apt, given that Mr Lee’s analogy of letting a hundred flowers bloom came from Mao Zedong’s “Hundred Flowers Campaign” in 1956 which ended with a crackdown on dissent.

Mao’s promise of opening up, so the arts and sciences could flourish, was made to encourage free expression. But when its people took his promise at face value and spoke up, Mao clamped down on them.

And so it would seem that the Singapore Government’s latest pronouncements on the use of the only official free speech zone on the island is also geared toward that end – to curb free expression, despite promises to the contrary.

“For the first time, barricades will be set up around the Speakers’ Corner site of the annual Pink Dot SG event, and attendees will have their identity cards or passports checked before they can enter the area,” the TODAY newspaper reported on 30 May.

The measures are to prevent foreigners from participating in the annual gathering of the gay community and its supporters to celebrate “the freedom to love.”

Last year, the Government, for reasons unknown, decided to enforce the rule that political events – even at Speakers’ Corner – are only meant for Singaporeans and Permanent Residents (PR).

It is a sudden move to enforce the rule so strictly, given that Pink Dot has been taking place since its inaugural event in 2009, and that foreigners had in fact participated in the celebration without any problems.

More importantly, the authorities had, thankfully, taken a “light touch” and allowed the event to go on each year.

When explaining the stricter enforcement this year, the authorities would only repeat the rule – that events at the park are only for Singaporeans and PRs.

Now, to adhere to the regulations, organisers of the event will have to ensure that foreigners are not even there to observe the event because, as the authorities explained, it “no longer distinguishes between participants and observers, and regards anyone who turns up to the Speakers’ Corner in support of an event to be part of an assembly.”

Anyone “caught illegally participating in Speakers’ Corner events can face a fine of up to S$3,000 for their first offence and up to S$5,000 if found to be repeat offenders.” (TODAY)

So how do you ensure that no foreigners participate in an event in an open park which is near to a train station where members of the public pass by every day?

Organisers said “it became clear” after much discussion with the authorities “that the only way to bring the new law to its logical conclusion was to set up barriers of entry into an open park”.

“We were holding back the barriers solution until we saw that nothing else was possible,” the organisers said.

Yes, this is a far cry from the promise of openness from the prime minister in 2004. Through the years, in fact, rules on the use of Speakers’ Corner have tightened, with the park being monitored by several CCTVs.

Pink Dot is the biggest annual event to be held there, with attendance in the last event reported to be 28,000. It is expected that despite the stricter enforcement of the rules, even more Singaporeans will turn up on 1 July.

Mao’s Hundred Flowers Campaign was in part a response “to the demoralization of intellectuals, who felt estranged from The Communist Party.”

Now, it seems the Singapore government will also face the same problem – isolating more Singaporeans from its elitist rule.

“Our society cannot back down, it could only progress,” Mao had said in his speech declaring the start of the campaign. “Criticism of the bureaucracy is pushing the government towards the better.”

PM Lee said something similar in his 2004 speech: “As a society also, we have to be forward-looking.”

“[We] have to be prepared to accept the diversity of views and to listen to the debate and to have this discussion, always with a view to moving Singapore forward,” he said.

Unfortunately, that discussion will now take place, if at all, with both sides separated by barricades, at a “free speech” zone which is being strangled to death by regulation.

The hundred flowers never had a chance. They have died under the weight of state-sanction xenophobia.