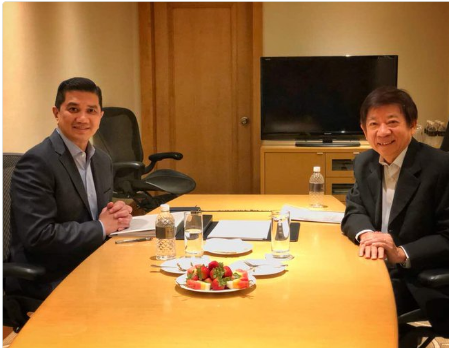 Azmin Ali, Economy Minister proved beyond doubt he got the mettle to run the show with his perfect composure at the High Speed Rail press conference today.

Observers say he captivated the audience with his straight talk and no nonesense attitude during the PC.

”Azmin Ali knocked out the PC on HSR. His english is perfect. You can’t mess with this guy,” said the observer.

Azmin is said to be the blue eyed boy of Anwar Ibrahim, having been with the leader since the birth of the reformasi movement.

But Rafizi is also one of the PKR enfant terrible.

While Azmin was the man behind the reformasi movement during the days Anwar was in jail, Rafizi played a major part in the campaign to bring down the regime of Najib Razak.

Today’s smashing performance delivered by Azmin, who appeared to have won the respect of the Singaporean Minister Khaw Boon Wan, will turn heads and get Azmin the thumbs up.

”He appears very calm and comfortable. He knows his subject by heart and was realiy dominant at the media event,” said another observer.