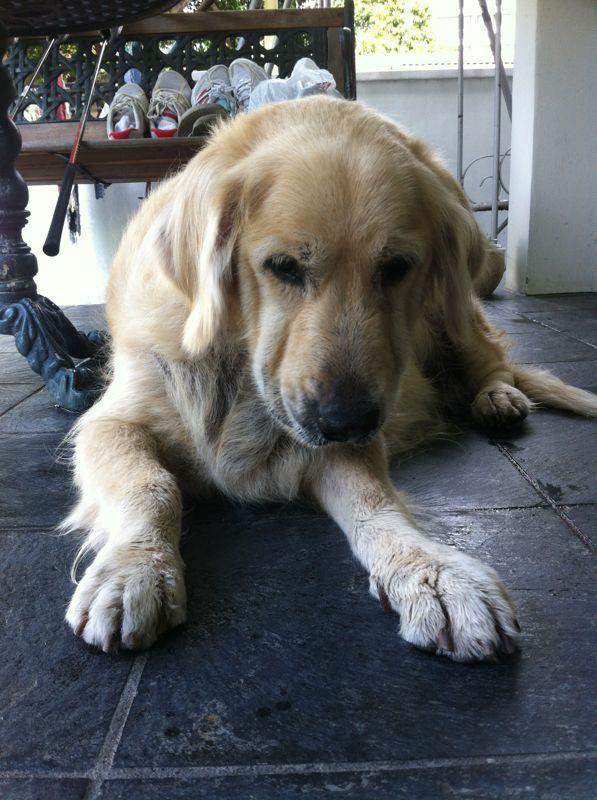 On February 27 2013, Victoria Lim found a lost Golden Retriever along Upper Changi Road. She said that the dog looked unkempt and had skin irritations. After cleaning up the dog, she sent it to a vet and through the vet’s assistance, retrieved the serial number of the dog’s micro-chip.
Ms Lim then contacted the Agri-Food and Veterinarian Authority of Singapore (AVA) and reported the lost dog. AVA refused to give the details of the dog’s owner to Ms Lim citing confidentiality. Ms Lim hoped that if the golden retriever’s owner’s could not be found, the government agency would try and re-home the dog. Ms Lim further indicated to AVA that if no one suitable was found, her family itself would adopt the dog.  |
AVA picked-up the dog from Ms Lim’s home on the same day, and Ms Lim specifically told them not to put the dog down if the owners cannot be found. The AVA staff who picked up the dog assured Ms Lim that they would not.
Ms Lim said that her family called AVA four times to check on the dog. Each time, the service personnel said that her manager would call them back, but the manager never did.
“We were left to check on the situation ourselves, each time stressing not to put the dog down and that we wanted to re-home her once all efforts to contact the dog’s owner were exhausted,” Ms Lim said.
On March 4, AVA told them that the owner’s telephone line was dead and that they would be posting a letter to their address, in a second attempt to reach the owner. They said they would try to re-home the dog.
On March 15, AVA again told them that they were unable to contact the owner. Ms Lim’s family again reiterated their intention to help re-home the dog. Once again, Ms Lim’s family stressed not to put the dog down.
On March 16, Ms Lim’s mother spoke with a customer service officer and repeated their request not to put the dog down, and that they had every intention to re-home her.
And then on March 18, AVA told Ms Lim’s family that the dog had been put down ‘last week’.
Ms Lim’s family was shocked by AVA’s response. “There was no apology or remorse at all expressed for the negligence AVA displayed,” Ms Lim said.
“We are familiar that the AVA faces space constraints and puts abandoned animals down when they have no chance of being re-homed. However, this incident shows that AVA’s procedures are inadequate, inhumane and lack transparency,” Ms Lim added.
The microchip tagged on the Golden Retriever revealed that she was 11 years-old, and was imported. In a Facebook message to AVA Ms Lim requested AVA to investigate the case.
“AVA has left my family and I distressed and very angry. In the span of three weeks, they have shown that they are an organisation that is not to be trusted, disorganized and negligent toward the care for the animals that they take in,” Ms Lim said in anguish.
Several netizens expressed outraged at AVA’s poor handling of the case, and AVA responded on 23 March admitting that a “lapse had occurred”, and that it understands “why many animal lovers are upset over the incident”.
In it’s statement AVA said:
“There are concerns about the health conditions if the golden retriever while it was kept at the pound. The golden retriever was kept by itself in a kennel large enough for 3 dogs and the facility was cleaned twice daily, in addition to the provision of adequate food and water. As it was old and not in a good condition, it was monitored closely and provided with veterinary attention. These included ensuring that its position was turned over regularly to prevent pressure sores as it had mobility problems.
Regrettably, its condition deteriorated and it continued to have a poor appetite despite being fed by hand. This can happen to dogs which are removed from a familiar environment as they may become depressed which may in turn significantly impact their health. On 8 March, its condition had deteriorated so badly that our veterinarians made the decision to euthanise it.”
responding to some queries if any action would be taken against the owners of the dog AVA said that it was investigating the case and will take action if there is concrete evidence of pet abandonment.