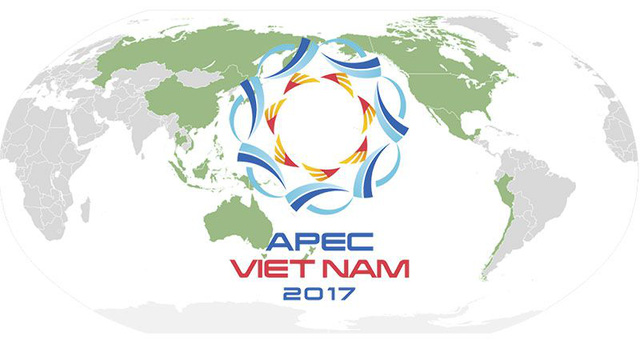 The 2017 Asia-Pacific Economic Cooperation (APEC) Economic Leaders’
Week will be held in Da Nang, Vietnam from 6th to 11th November.

This is the second time Vietnam has taken on the role of APEC’s Chair to host its activities.

The APEC theme of “Creating new dynamism, Fostering a shared future” for 2017, set by Vietnam, was highly evaluated and supported by APEC members and partners.

On the basis of promoting the achievement of APEC cooperation over the past time, Vietnam has selected four major priorities, namely promoting sustainable, innovative and inclusive growth; deepening regional economic integration; strengthening micro, small and medium enterprises’ competitiveness and innovation in the digital age; and enhancing food security and sustainable agriculture in response to climate change.

Moreover, in the role of APEC’s Chair, Vietnam has received strong support from other APEC members for proposing many major initiatives, like establishing the mechanism for discussing APEC’s long-term cooperation.

The initiative on promoting inclusiveness in developing regional economy, society and finance are expected to connect APEC’s standing cooperative programs, providing all people with the fruits of  globalization and trade liberalization.

This initiative of Vietnam has been widely supported by other APEC members, as it met many members’ concerns for ensuring their people as well as entrepreneurs take part fully and share interests equally from economic growth and connections, in the context of increased inequality and development gap.

The initiative reaffirms the practical role of APEC, meeting its members’
common expectations, contributing to the establishment of a  sustainable and inclusively developing APEC community.

Speaking about this initiative, First Deputy Foreign Minister of Viet Nam Bui Thanh Son, also the 2017 APEC SOM President, stated that while globalization and trade liberalization have significantly promoted global trade and growth, contributing to the reduction of poverty, the economic inequality is continuously widening.

Emerging trends like the Industrial Revolution 4.0 and Digital Technology are opening up unprecedented opportunities, though there are still concerns about the increased digital divide.

Many people have been left behind in the race for job and business opportunities. Certain parts of the population, a number of small enterprises and people just could not follow the integration process, being lagged behind.

According to the SOM President, cooperation on inclusiveness between APEC economies, in fact, is scattered and lacking close coordination. APEC has not formulated comprehensive policies to boost economic, financial and social inclusiveness, while these three areas are interdependent and complement each other.

The United Nations Resident Representative to Vietnam, Kamal Malhotra highly regarded the Vietnamese initiative, highlighting that inclusive growth is a key element in the United Nations’ 2030 Agenda for Sustainable Development.

This reflects the principle of “leaving no one behind” and the United Nations’ vision of “building a just, equitable, tolerant, open and socially inclusive world, in which all the needs of the most vulnerable are met”.

With the launch of the initiative, the APEC forum on economically, financially and socially inclusive growth was held in Ho Chi Minh City on August 28 and attended by more than 200 delegates representing APEC members’ economies, international and regional organizations, APEC observers, as well as the academics, businesses, and media.

The delegates highly appreciated the results of the forum, asserting that the initiative has contributed positively to the regional inclusive growth and for the first time is there an activity that comprehensively connects the attempts at an inclusive growth in all three sectors, as well as promoting policy and active cooperation between APEC’s committees and working groups.

The forum has contributed to improving general awareness of the need to create an APEC agenda for inclusive growth, with specific criteria, interdisciplinary solutions, related constitutional and legal capacity building measures to boost inclusive growth.

Vietnam’s efforts to propose the suitable APEC theme, priorities and
cooperative initiatives have met the concerns and interests of other APEC member economies, businesses and people, being consistent with the general trend in international cooperation and contributing to the regional socio-economic development strategies, including sustainable development and human-centered development.

By hosting the 2017 APEC, Vietnam has not only reaffirmed its policy of
deepening international integration and attaching great importance to Asia-Pacific, including regional cooperation mechanisms like the APEC Forum.

It has also highlighted its strategic visions towards a peaceful, stable and dynamic Asia-Pacific region, which continues to be the driver of regional as well as global economic growth and linkages.