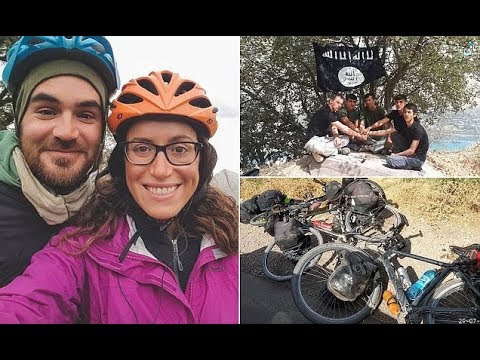 On July 29, five terrorists in Tajikistan rammed a car into a group of seven cyclists, before setting upon them with knives. Two cyclists from the United States, and two others from Europe were killed. The American couple had been traveling the world on their bicycles when they were killed in the Isis attack.

#BREAKING: Deadly Tajikistan 'hit-and-run' in which 4 tourists killed, 3 injured, was a terror attack on tourists pic.twitter.com/Po7hIVAVFj

Jay Austin and his girlfriend, Lauren Geoghegan, (both 29) from Washington DC were killed in an Isis attack in Tajikistan in Central Asia. The country is surrounded by Afghanistan.

Austin and Geoghegan set off on their bicycle trip around the world in July 2017 in South Africa, and chronicled their journey with regular updates and photos on their SimplyCycling blog. One of their journal entries records that that while “badness exists… by and large, humans are kind. Self-interested sometimes, myopic sometimes, but kind. Generous and wonderful and kind. No greater revelation has come from our journey than this.”

The couple decided to quit their jobs and used all their savings to explore the world on their bikes. They were killed about 80km outside the capital city of Dushanbe when a car with five knife-wielding men came knocked them over. The other two cyclists that were killed in the deadly attack are Rene Wokke and Markus Hummel from Netherlands and Switzerland respectively.

Great roads, great views, great company. ? After nine relaxing days in Osh, it's nice to be back on the bikes and heading up into the mountains.

Isis claimed responsibility for the attack, but Tajik authorities are pointing their fingers at a banned political party, the Islamic Renaissance Party of Tajikistan. The attack was the first terrorist assault against Western tourists in Tajikistan.

Islamic State has not just claimed the terrorist attack in Tajikistan which killed 2 Americans, along with 1 Swiss and 1 Dutch national, but has also released a video of the attackers. Some thoughts to follow… 1/ pic.twitter.com/XQxEbhsLpx

The couple had also already cycled through Europe and Central Asia and were planning to go to Uzbekistan after Tajikistan. Geoghegan was a Georgetown University graduate who also worked in the school’s admissions office.

Kazakhstan has been great. Awesome camping on the big, quiet steppe. We sleep late and don't really hit the road until noon. Here's Lauren at maybe 12:03, just a few minutes into our day's riding, right after a kind Kazakh man stopped his truck, said hello and asked us a few questions (my Russian is pretty feeble but I nailed this particular conversation), then handed us two ice cream bars and drove off with a wave. ?? (Being a vegan, I gave mine to Lauren. She could not finish both.)

Georgetown’s dean of admissions, Charles Deacon, said in a statement: “We are heartbroken to hear of Lauren’s passing in this devastating tragedy and have expressed our deepest condolences to her family. Lauren was a valued colleague and dear friend to many at Georgetown and an overall treasured member of our community.”

Austin had worked at the U.S. Department of Housing and Urban Development and was an advocate for sustainable development.

“On Sunday my beautiful and beloved niece Lauren Geoghegan (29) and her amazing boyfriend, Jay Austin, were tragically killed while adventure-cycling in Tajikistan,” Lauren’s aunt posted on social media.

Adding: “They were the target of a horrific terrorist attack. There are no words. Our family is shocked and devastated by this senseless loss. Lauren and Jay chronicled their journey and experiences with fabulous photographs and captivating blogs. In tribute to them. I invite you to visits their website so that we can remember them for the dream they were outrageously living out and not the way they died.”

Austin worked for seven years at the US Department of Housing and Urban Development and Lauren was a senior admissions officer at Georgetown University before the pair decided to go on their bike adventure.

“He was just a gentle soul who cared about the world and not leaving any footprint and leaving it a better place,” Jeanne Santovasco, Austin’s mother said.Follow us on Social Media