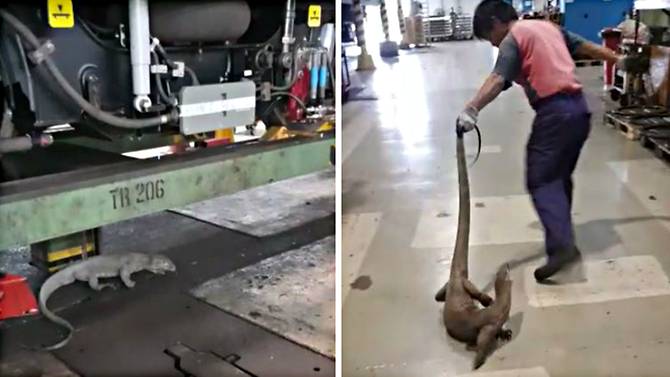 In the video, SMRT staff can be seen prodding the reptile from the undercarriage of a train compartment. Two staff members held down the animal’s head with a metal rod and the handle of a dustpan, following which a third person wrangled the reptile and dragged it away by its tail:

WATCH: The moment a monitor lizard is forced out of an undercarriage of a train at an SMRT depot and dragged away by its tail.

ACRES deputy chief executive Kalai Balakrishnan asserted to reporters that the handling of the reptile should have been left to experienced wildlife rescue personnel.

He added that besides the chances that the lizard could have been harmed or provoked to the point of injuring someone, the “presence of many people, use of sticks to probe the lizard, dragging of the tail can cause the animal to get very stressed.”

Balakrishnan did, however, acknowledge SMRT staff’s efforts to let the animal go outside and possibly return to it’s natural habitat of drains and canals.

Members of the public who come across such wildlife are advised to call the ACRES wildlife rescue hotline at 9783 7782 and refrain from provoking, harming, or cornering wild animals.