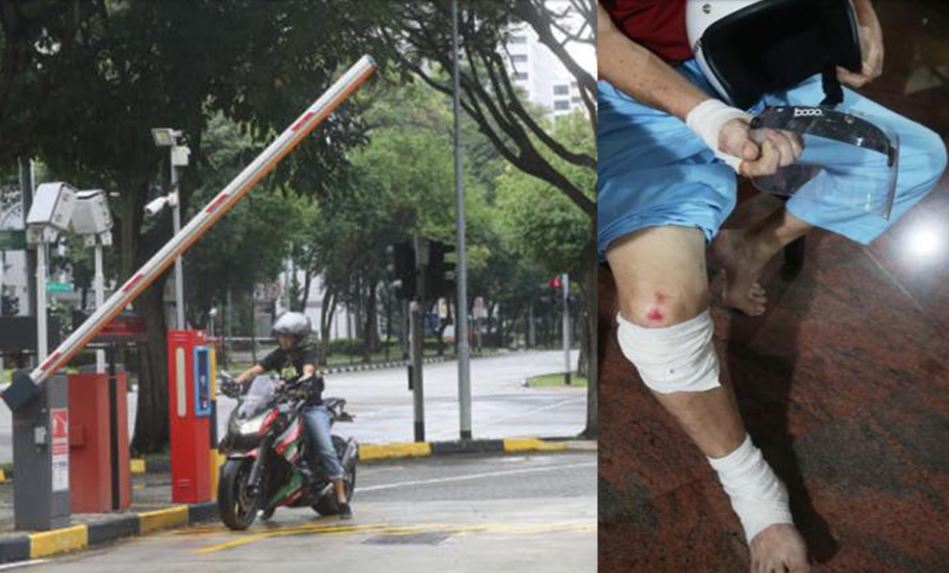 An elderly technician Tan Ying Xiong suffered injuries last Tuesday after a HDB carpark gantry barrier at Block 659B Jurong West St 64 fell on his head, around 7.30 in the morning. The shocking incident caused the 65-year-old to become pinned underneath his motorcycle, where he remained trapped for at least ten minutes.

Tan, who has lived in Jurong for the past 18 years, recounted to the Chinese daily that he rode his motorcycle towards the gantry and waited for the car in front of him to move off, before he rode forward. His motorcycle’s IU was scanned and the gantry barrier went up as per normal, and Tan moved forward to exit the open air carpark.

Suddenly, the barrier came crashing down on him. Tan shared, “I had no time to react when I felt a metal rod fall on my head.”

The impact not only threw Tan off balance, causing him to fall to the right, it also caused his motorcycle to fall on him and pin him to the ground. With no other pedestrian or commuter in sight, the trapped Tan slowly managed to get his hands on his cell phone and contacted his wife.

Fortunately, another motorcyclist and a pedestrian chanced upon Tan after he had been trapped for ten minutes and they helped to free him. The kind strangers helped Tan to the kerb and helped him to call an ambulance.

Tan, who suffered abrasions to his right shoulder and leg, was conveyed to the hospital. He was discharged that same day.Follow us on Social Media