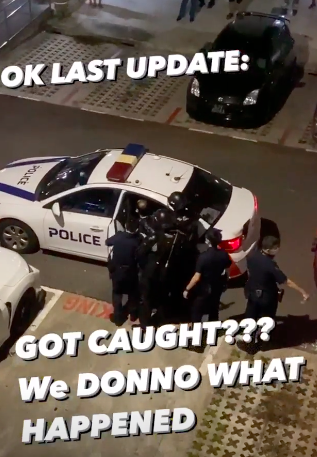 A 45-year-old man was apprehended by the police after allegedly throwing glass bottles from his flat in Yishun.

The Singapore Civil Defence Force (SCDF) and Singapore Police Force (SPF) personnel descended upon a flat in Yishun after the SCDF received a call for assistance at Block 703 Yishun Ave 5 on Tuesday (Oct 20).

Videos circulating on social media showed Singapore Civil Defence Force and Singapore Police Force personnel on scene with an ambulance, with a commotion taking place outside the man’s flat.

A resident living in the area shared on her Instagram Stories an account of what was observed. According to her, the sound of glass bottles being thrown out of a window was heard at around 6pm.

SPF’s police officers in full gear were also at the scene on the sixth floor corridor. Members of the SCDF DART abseiled down the block and entered the unit via the window. At the end of the incident, several police officers were seen escorting a handcuffed man into a police car.

A police statement on the incident read: On Oct. 20, 2020 at 5.59pm, the police were alerted to a case of suspected rash act at Block 703 Yishun Avenue 5, where a man was allegedly throwing glass bottles from a unit of the said block. A 32-year-old woman, unknown to the man, sustained a cut on her leg from one of the thrown bottles and was attended by a paramedic at scene.

The police established the residential unit of the man and attempted to engage him. The man locked himself in the unit and refused to heed officers’ repeated calls to open the door. He also threatened to hurt himself.

In order to ensure the safety of the man, officers from the Special Operations Command effected forced entry into the unit and apprehended the man. The 45-year-old man was apprehended under Section 7 of the Mental Health (Care and Treatment) Act and Rash Act Causing Hurt. Police investigations are ongoing.

SCDF deployed three safety life air packs and Rescuers from the Disaster Assistance and Rescue Team (DART) were on standby as a precautionary measure.

There were no reported injuries.